Working with the Toyota Racing Development team, these new packages, for the Tundra, Tacoma and 4Runner, are the culmination of the experience they have learned at the grueling Baja 500 and 1000 endurance races. Each package is built to withstand some pretty harsh treatment while amping up the fun factor of off-roading.

Specifications for all TRD Pro Series

Each Tundra, Tacoma and 4Runner with this package will come with:

Also, Toyota is announcing the new Inferno color will be added to its lineup. This hot red is joined by black and super white. 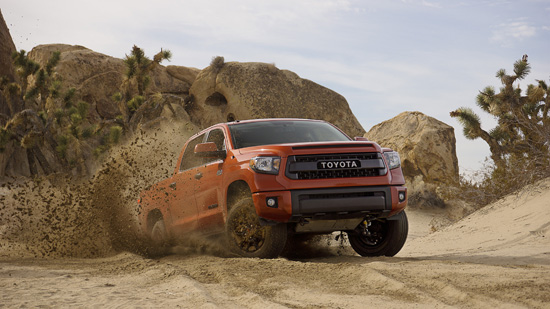 The Tundra TRD Pro will get some other features as well including: 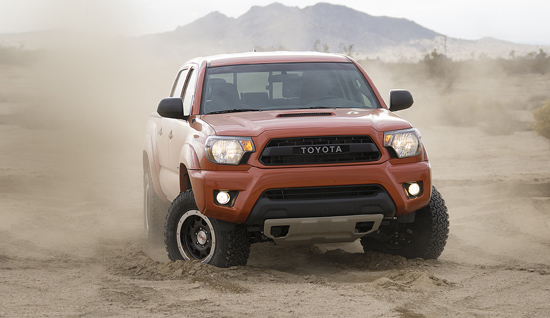 This “Taco Supreme” has some impressive wheels and suspension upgrades. Also, the 2″ front lift with increased wheel travel is a great addition.

The Tacoma will get the standard features, plus what Toyota calls a “little hot sauce:” 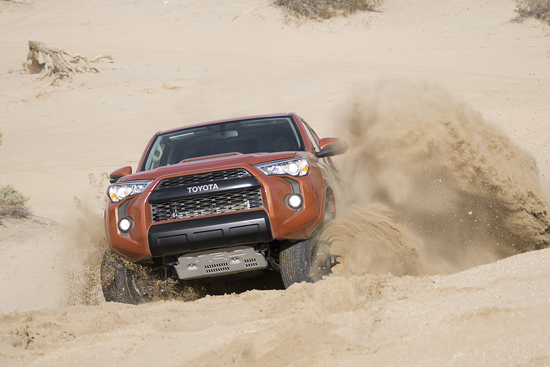 The TRD Pro 4Runner comes with an assortment of off-road goodies.

Last but not least, the 4Runner will be equipped with:

While it would have been really cool to see Toyota come out with a so-called Raptor fighter, this truck package will probably the affordable alternative. Here are our top reasons why we think these packages are cool.

2. The shocks are a really nice upgrade. Toyota’s engineers did the valve tuning, so you get a factory like ride in an upgraded shock that’s hard to buy off the shelf. The increased piston size means that you can get better performance without stiffening the ride. Our guess is that these shocks are a $200-$400 upgrade if you had to buy them after-market (and you probably can’t get a factory tuned off-road shock).

3. Additionally, the external reservoirs on the shocks boost performance if/when people really hammer their trucks (only we doubt most of the people will be doing this).

4. The Tundra TRD Pro has an “oil filter access panel.” It is nice that Toyota is FINALLY listening to its customers on this. In fact, Tim brought this up in Jackson Hole and surprised a few people on it. It is highly doubtful that his question at a regional Toyota event caused the access panel to be added, but, hey you never know!

The TRD Pro series is expected to hit dealerships this fall. Pricing has not been announced.