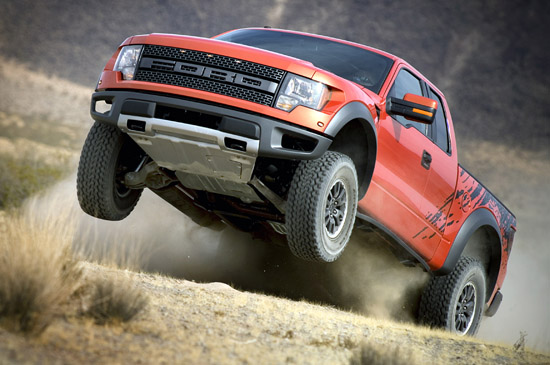 When the dust settled after the big Ford F-150 reveal, one important truck was missing – the SVT Raptor. Could Ford have really decided to kill one of its customer’s favorite trucks? Maybe so. The writing it seems is one the wall with the ending of the 6.2L engine and the many changes the aluminum-based F-150 is making. As we speculated last July, the future of the Ford Raptor is certainly cloudy.

The current rumor mill is saying that the Ford SVT Raptor isn’t currently in Ford’s 2015 production schedule. Ford truck marketing manager Doug Scott has so far declined to confirm the model was being axed but said the company didn’t have anything to say about the truck right now. Those signs seem to point to the Ford killing the Raptor. Also, remember that Ford has always said the Raptor was meant to be a limited-run vehicle.

News of the death of the Raptor is pretty crazy when you consider that on September 12, 2013, Ford said they were ramping up production to meet demand. The average time on lot for a Raptor had shrunk to just 15 days (the average is 60 days) and it had record sales in 8 of the last 10 months. For 2013, the Raptor was up 13 percent over the previous year. With such strong sales, it seems odd that the Raptor could go away.

If the Raptor really does go away, it would join Toyota’s Rock Warrior and the FJ Cruiser as off-road vehicles that didn’t make the cut. While there are many reasons for their demise, fuel economy standards are a big part of it.

The Raptor isn’t exactly fuel friendly – a standard 2014 EcoBoost F150 gets 15/21, while a 2014 Raptor gets 11/16. While part of this lack of efficiency can be explained by the 6.2L, it’s more than that. The Raptor has bigger tires that hurt fuel economy, is less aerodynamic (both in terms of drag coefficient and frontal area), and is geared a bit differently too. Even with the EcoBoost in place of the 6.2L, the Raptor wouldn’t get “good” mileage

For Ford, the reality is probably more that they want/NEED to sell more fuel efficient vehicles. A good place to start is to get customer’s to buy more fuel efficient models of its top selling model – the F-150. Need proof? Look no further than the small 2.7L Ecoboost.

What is the future of the Raptor?

Now that we know Ford isn’t exactly denying the death of the Raptor, what will happen to it? It will most likely re-emerge in a few more years as either a stand alone offering or a trim level upgrade.

The first thought is important and probably the most expensive. The truth is that the Raptor is a significant and substantial modification over the stock F-150. This means the truck will have to undergo extensive new design and engineering work to upgrade it. This is the most expensive and probably most likely option. It also means it will be quite a while until we hear anything.

Another thought would be for Ford to simply offer a Raptor styling and performance package upgrade. This trim level offering would be significantly cheaper than doing a complete do over of the engineering and would still keep the Raptor in its marketing. An offering like this would be more akin to the old Toyota Rock Warrior. While, it may not be the most sexy option, it would save a ton of money and bring a product out in the short term. The truth is that Ford’s “sales crown” is in being seriously contested and you have to wonder how long they would be willing to spend on redoing the Raptor.

In the near term, Ford will probably keep producing the Raptor for another year with their current supply. Then it may be adios unless Ford can build a dedicated off-road truck with much better fuel economy. That would be quite the engineering feat.