After waiting for years, Ford, GM, Ram and Nissan will stop playing games and adopt the J2807 standards. The days of “magical” towing dust are done on light-duty trucks. 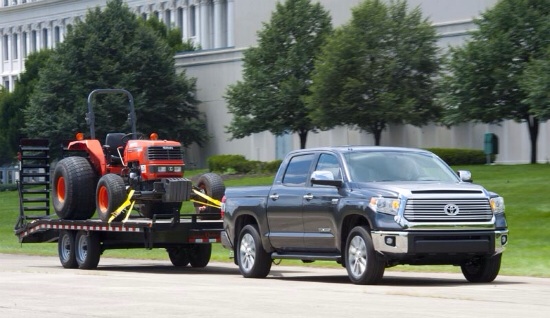 Finally, after years of waiting, it has been confirmed that all the other truck makers will use the J2807 standard.

In an Automotive News article and as we have stated, the adoption of the standard is a bit of a follow the leader. Ford says with the 2015 pickup, it will finally use the J2807 towing standard.

Automotive news posted this about each maker:

Mike Levine, a spokesman for Ford, told Automotive News that the 2015 F-150 will get a new towing rating to go with its new aluminum body.

Tom Wilkinson, a GM spokesman, said that “when the other two major manufacturers move, we will move at that time.” Wilkinson said GM already knows how the standard will change the Silverado and Sierra’s stated towing capacities.

“We already validate the trucks to [the J2807 standard]. It’s just a matter of adjusting the numbers,” Wilkinson said.

A spokesman for Ram also said that it would list towing capabilities for its 2015-model pickups to comply with the standard.

In a written statement, a Toyota spokesman said the company is glad to have company in complying with the standard.

“This will be most beneficial for customers, as previous methodologies created by individual manufacturers made it difficult for customers to compare tow ratings on an apples-to-apples basis,” the statement said. “Toyota was always a firm believer in an industrywide standard, as evidenced by our adopting SAE J2807 back in 2011 and being the only manufacturer to adopt it until now.”

This is great news for truck buyers and fans. Having a consistent testing method and standard for towing will create a more apples to apples comparison as well as increase the safety of all towing (if the operator follows them).

What do you think? Is this long over due?