All Entries in the "TRD" Category

For off-road race fanatics, Ironman holds a meaning far beyond Stan Lee (creator of the Ironman comic) and Robert Downey, Jr (who portrayed the comic book hero). You could say the nickname was given to Ivan Stewart, whose career is the stuff of legend; but, more accurately, Stewart laid claim to it fair and square.

The History Of TRD

Following his victory over the Pharnaces in 47 BC, the legend is that Julius Caesar addressed the Roman Senate and announced

TRD Parts for the Toyota Tundra

Here’s a list of TRD parts available for the 2007 and 2008 Toyota Tundra. We’ve included the suggested retail price as well as what you can expect to pay for each part (prices don’t include install). 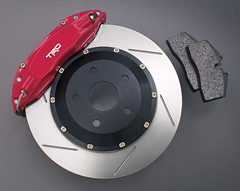 TRD’s part description: “Provides increased heat capacity for substantially more resistance to brake fade and caliper distortion during multiple stops from high speed. Creates firmer pedal feel due to stronger and more rigid components. Better modulation characteristics under threshold braking…” Our take: Cool. Literally. Keeps brakes cool. If you plan on racing and/or towing like crazy, buy these brakes. You can probably get them for $2500-$2600, but expect to have to order them. The good news is you can put your old rotors and calipers on eBay or Craigslist and get some of your money back.

Poor Man’s Alternative: G2 Brake Caliper Paint Red. If you’ve got a few hours and a little bit of talent with a paint can, you can get the look without spending very much. G2 is quality stuff too – stay away from cheap caliper paint kits. They don’t stand up very well under high heat.

G2 Brake Caliper Paint Retails for $38.00, and is available in black, green, purple, and yellow too.