As we all know, new Toyota Tundras have a pretty substantial forward rake: 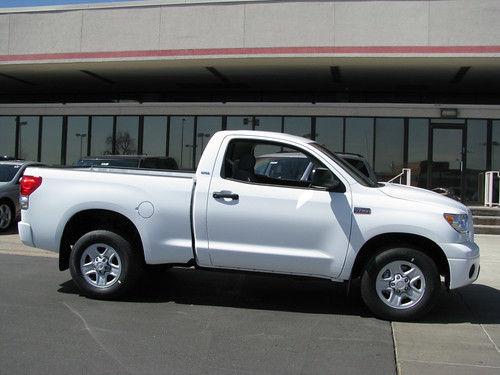 This is a picture of a 2008 SR5 Regular Cab 4×2 with the 5.7 V8. If you look at the building behind the truck, you can see that the ground is roughly level. The truck, however is not. The rake (or forward tilt) of the truck is pretty severe. You can also take a look at the amount of space between the tire and the fender in the front and compare that to the rear. It’s pretty significant.

We received an email last week from a new owner of a 2008 4.7 DoubleCab “Tundra Grade” Tundra. The new owner is very happy with his truck, but he’s got a problem – no keyless entry.

As I’m sure everyone knows, Toyota began offering the “Tundra Grade” package on the Tundra for the 2008 model year. The package, designed to compete with work truck packages offered by Ford, GM, and Dodge, strips the Tundra of a few standard features in exchange for a discount. Here’s what’s taken off the standard truck when you buy a Tundra Grade:

Tundra Grade trucks also qualify for special rebates and incentives that drop the price some more. So, if you don’t need any of that stuff, it’s probably a great deal.

So if you want keyless entry installed on your “Tundra Grade” Tundra, consider visiting your local Circuit City, Car Toys, or similar. Any good car stereo install shop will be able to add a decent after market keyless entry system for as little as $100. For $200-$300, you can also have an alarm and/or a remote starter. You can also ask our dealership if they recommend anyone and if they can get you dealer price – most sales managers are happy to give you this information.

NOTE: When we were initially asked, we made a mistake here at TundraHQ and told this person that he could get keyless installed, provided he had a V8 Tundra. Our apologies. 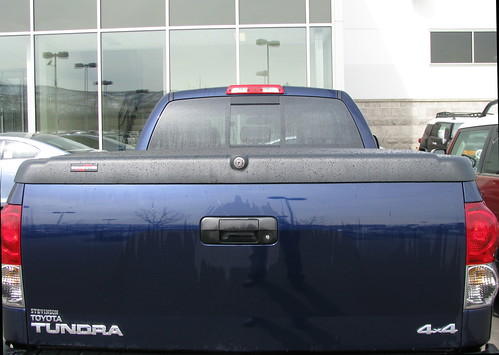 See all the photos we took of the Duracover for the Tundra.

First, a little background on Durakon Industries. Durakon is probably best known (to truck owners at least) as a bed liner manufacturer. They supply hard plastic bed liners to a lot of OEMs – Ford, GM, and Nissan have all contracted with Durakon to supply factory plastic bed liners for their new trucks. Durakon’s expertise isn’t limited to bed liners, however – they also supply tonneau covers, bed mats, and other high strength plastic components to OEMs and as after market products. Durakon, for instance, manufacturers the Honda Ridgeline’s award winning tonneau cover, a big chunk of the Avalanche’s cargo system, and the cover for the Subaru Baja (among others). A lot of times when you buy an after market part, you’re worried about quality. Based on Durakon’s background, we were expecting a high quality item. We were not disappointed.

LED Lights Are In – Everything Else Is “Out”

LEDs (light emitting diodes) are the next “big” thing in automotive lighting. LEDs have been around for a long time, but they’re finally bright enough and, more importantly, cheap enough to be used in most automotive applications. LEDs are superior to traditional automotive lighting in a lot of ways. They use less power – a typical halogen headlight is rated at 55W, yet the most powerful LED uses less than 20W, with most LED’s using less than 5W. LEDs are nearly shock-proof (great for off-road use), unlike flimsy bulb elements. LEDs also have a very long lifetime – a good one will last at least 10,000 hours before failing. If you figure you drive an average of 1.5 hours a day, it will be about 18 years before your LEDs burn out. Finally, LEDs can be made in a variety of colors and sizes for nearly every application.

Warning To All Tundra Owners!!!!

Last December, I got an e-mail from a friend regarding a new spark plug (Pulstar Pulse Plugs) that was supposed to increase gas millage and give more horsepower. I checked the website and started reading about how great the plug was – most of the comments were good, while a few said that they couldn