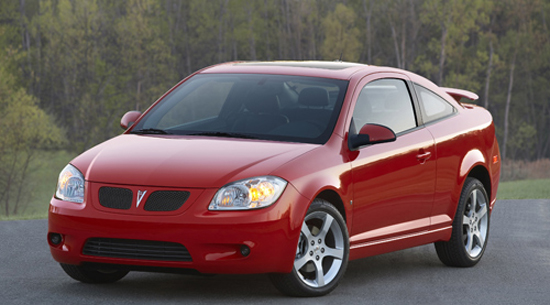 In case you missed the news, GM has a issued a recall for an ignition switch failure on 1.6 million Chevrolet, Pontiac, Saturn and Opel vehicles. Initially, this recall was for Chevy Cobalt and Pontiac G5 sedans. It has since grown to include more models. Here is a recap of the recall from GM.

The problem: The ignition switch is not sturdy enough, so the key can be jostled out of the “run” position by a heavy key chain or the motion of a car running off the road, cutting power to the car and potentially causing the airbags not to deploy in a crash.
The fix: GM will send a letter to owners the week of March 10, with the first parts available in early April. Until then, owners are advised to use the ignition key with nothing else attached.
Affected models: 2003-07 Saturn Ion, 2005-07 Chevrolet Cobalt, 2006-07 Chevrolet HHR, 2006-07 Pontiac Solstice, 2007 Saturn Sky, 2007 Pontiac G5; 2005-06 Pontiac Pursuit (Canada only), 2007 Opel GT (Europe only)
Scope of recall: 1.6 million cars, including 1.4 million in the United States
Known incidents: 31 frontal crashes in which 13 front-seat passengers died.

As the story goes, GM was made aware of the problem through field reports back in 2005. The following year, GM changed the design and approved changes by supplier Delphi Mechatronics. Yet, the change didn’t happen until the 2007 model year. That isn’t so bad. What’s bad is that GM didn’t start “a formal inquiry into a cluster of crashes of cars from 2007 and earlier in which the airbags did not deploy,” until 2011 according to an Autonews.com story.

Now that the “cat is out of the bag,” GM has been releasing statements that it is a “changed” company and they are taking a hard look at how this happened. Autonews.com goes on to say that they don’t want to repeat the “backlash from the Toyota unintended-acceleration crisis” and is hoping for a more “contrite tone.”

“The process employed to examine this phenomenon was not as robust as it should have been,” GM North America President Alan Batey said in a statement last week. “Today’s GM is committed to doing business differently and better. We will take an unflinching look at what happened and apply lessons learned here to improve going forward.”

The NHTSA has since gotten involved and has launched an investigation. If the agency finds that GM didn’t move in a timely manner to recall the cars with the flaw, GM could face fines up to $35 million.

Seems pretty darn likely GM will be fined. We can’t imagine the NHTSA could find that GM moved in a timely manner.

Now GM is in full damage control mode. The last few years, they have been working hard to change their image and drop the Government Motors moniker. This type of gaffe could further damage that brand and it seems fairly likely that there will be some senior manager shakeup.

Why would I say that? That is pretty much what Batey wrote in a USA Today op-ed piece that ran last week.

“We want our customers to hold GM and our vehicles to a high standard,” Batey wrote. “If we don’t measure up, there is a senior leadership team in place that is not afraid to act to make things better.”

Sorry Mr. Batey, we don’t think you measure up. Do you?