Toyota has announced that they intend to recall 3.8 million driver’s side floor mats just as soon as they come up with a replacement for the existing mats. In the meantime, owners of the affected vehicles are advised to remove their driver’s side mats. The reason? The accelerator can get stuck under the mat and the driver may not be able to slow the vehicle, potentially resulting in an accident.

This recall announcement is due in large part to a tragic accident that happened last month. There’s a very accurate news story about the accident that’s worth a look (see the YouTube clip after the break).

Here’s a new one:

TOYOTA IS RECALLING 1,348 MODEL YEAR 2009 AND 2010 PASSENGER CARS BUILT FROM JUNE 2, 2008 TO MAY 4, 2009. THESE VEHICLES WERE NOT EQUIPPED WITH LOAD CARRYING CAPACITY MODIFICATION LABELS WHICH FAILS TO CONFORM WITH THE REQUIREMENTS OF FEDERAL MOTOR VEHICLE SAFETY STANDARD NO. 110

Investigative reporting by Boston’s WCVB (channel 5) seems to have uncovered evidence that 2000 and 2001 Tundras may be susceptible to the same type of frame rust that plagues same model year Tacomas. They’ve uncovered more than 2 dozen NHTSA complaints against Toyota from 00′ and 01′ Tundra owners. 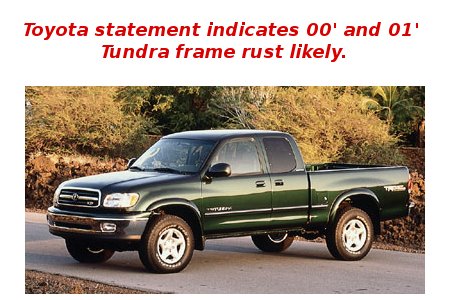 Perhaps most importantly a statement from Toyota seems to admit some level of culpability:

It is important to understand that “manufacturing defect” is a generic term that globally defines an issue’s root cause, whether it is design, assembly, process, or manufacturing….Toyota’s Customer First approach dictates that using the information obtained from the Tacoma, we pro-actively investigate other vehicles of similar design and production elements. In doing so, our investigations have indicated that there are a small number of complaints for a similar condition on 2000 and 2001 Tundras. We are currently investigating each incident.

Translation: The 00′ and 01′ Tacoma and same model year Tundra shared many of the same design and production elements. According to the statement above, Toyota seems to have anticipated the fact that 2000 and 2001 Tundras could have the same frame rust issues as 00′ and 01′ Taco’s. The above statement (taken from WCVB’s website) also seems to indicate that Toyota is laying the groundwork for a warranty enhancement for the Tundra.

On August 30th, 2007, we wrote a post about “Bed Bounce,” a problem that we heard a lot of new Toyota owners complaining about at the time. We laid out a reasoned analysis of the problem and the likely causes, and many people who read the post seemed genuinely concerned and/or effected by the problem. At that time, we weren’t completely certain about the actual size and scope of the bed bounce problem, so we decided to send an email to Toyota. After a lukewarm response, we realized that we needed some hard data if we were going to have any hope of getting a sense of the size and scope of this problem.

Many 2007 and up Toyota Tundra owners have experienced something we like to call “bed bounce.” Our best post on the subject explains the Toyota Tundra bed bounce problem quite well, and you can read about a couple of suggested fixes for bed bounce – “possible bed bounce cure” and the “Willybar Bed Bounce treatment“.

Still, the fact is that neither of the above fixes is ideal or 100% effective. The truck shouldn’t have this issue in the first place. We’re disappointed that Toyota hasn’t fixed this issue to date, but perhaps the trouble is the fix isn’t that easy. In the interests of generating a bed bounce fix, and helping Tundra owners nationwide get Toyota’s attention on this issue, we’ve been talking about this problem for a while now.

One of our readers, Jeff, works for a company specializing in measuring and analyzing frequency data. In a previous career, Jeff worked as an engineer with a Nascar team. Between all of his knowledge and experience, Jeff (a Tundra owner who has experienced bed bounce first hand) decided to measure the difference in suspension response between his old 2003 Tundra and his new 2008. Here are some graphs of the results and some conclusions: