Here on TundraHeadquarters, we’ve been talking about “bed bounce” since early 2007. After receiving dozens of comments and complaints, we contacted Toyota requesting  more info about the problem. The result? An oh-so-typical Toyota customer service email that said “Toyota had no information” regarding this issue.

Since that time, Toyota has steadfastly ignored and/or disavowed any and all bed-bounce complaints. A few Tundra owners complained enough to be referred to arbitration, and in these proceedings Tundra owners were told by Toyota representatives that the condition we describe as “bed bounce” was completely normal.

While it’s true that all pickups bounce a little bit – especially if they have stiffly tuned suspensions like the Tundra – it was clear from reports, videos, and testimonials that there was nothing normal about this problem to the people that suffered from it.

Last week, Toyota quietly issued a TSB offering a bed bounce treatment for 07+ Tundra DoubleCab owners that promises to reduce the severity of this issue. I have three thoughts:

UPDATED: We have more details on today’s announcement.

Sources at Toyota’s sales division have told us to expect a major announcement from Toyota today that details the official unintended acceleration recall repair. As we reported last week (a full two days before the Automotive News made a similar report), the fix will be a type of shim that will prevent the pedal mechanism from getting hung up on the friction pad inside the accelerator assembly. 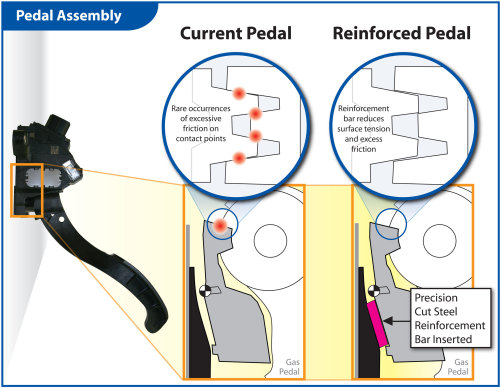 This shim will be a quick, easy fix, and according to Toyota dealers we’ve spoken with, parts will begin arriving as soon as the middle of the week. While Toyota has yet to detail the order that vehicles will be repaired in, here’s what we’ve learned so far:

A couple of sources from Toyota’s sales division have told us off the record that the official accelerator recall fix is ready and waiting for NHTSA approval.

The “fix” is rumored to be nothing more than a simple shim that will keep the accelerator mechanism from getting stuck. It’s anticipated that Toyota can manage to repair most of the effected vehicles within the month. Sources say that recall repairs could begin as early as next week, meaning that Toyota’s sales freeze could be over in just a few days.

For the last few months, Toyota has led the public to believe that any incidents of unintended acceleration were caused by out-of-position floor mats. While this was most likely the cause of a fatal Lexus crash in California last August, many investigations failed to prove that floor mats were the root cause of unintended acceleration complaints. Today, Toyota has announced yet another recall (on top of the original floor mat recall) to repair or replace approximately 2.3 million throttle mechanisms. From Toyota’s press release: