When news first surfaced that Toyota was planning to shrink the accelerator pedals in many 2007-2010 Toyotas, we cried foul. While making the gas pedals smaller would likely help avoid a scenario where the accelerator would get stuck under the driver’s floormat, the fact is cutting down the pedal is only a half-measure – the only way to cure the problem is to reprogram the computer so that it includes a brake-to-idle failsafe. 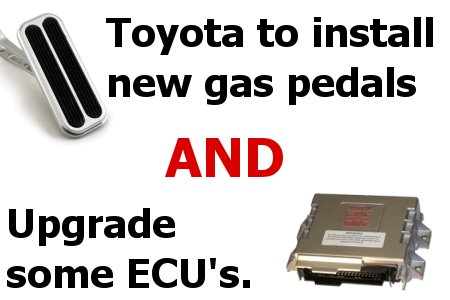 Toyota's official recall includes new gas pedals for all and brake-to-idle failsafe upgrade for some.

For those who don’t know, “brake-to-idle failsafe” is a computer control that cancels accelerator inputs while the brakes are being depressed. Therefore, with brake-to-idle failsafe it’s impossible for a stuck accelerator to cause an accident, because one touch of the brakes tells the engine computer to ignore the gas pedal. It’s a simple and idiot-proof countermeasure the will overcome any stuck accelerator, and all it requires is a programming updated to a vehicles ECU (engine control unit).

When Toyota officially announced their plans to re-size accelerator pedals on many newer Toyota’s today, they also announced that they would be re-programing the Camry, Avalon, ES350, IS250, and IS350 to include the brake-idle failsafe system.

This is great news for Toyota owners and a great example of Toyota doing the right thing. Good work, Toyota!

Today, Toyota has recalled 110,000 1st generation Toyota Tundras due to frame rust concerns. Specifically, this recall requires dealers to inspect the rear cross member and rear brake line mounts on 2000-2003 Tundras for significant rust. If dealers find that the frame’s rear cross member or brake line mount has significant rust, the corroded parts will be replaced as soon as possible.

Toyota has recalled 2000-2003 Tundras over frame rust concerns. Hopefully, this is just a first step.

Toyota’s recall is great news for owners of 2000-2003 Tundras with frame rust, but it is only a half measure. Toyota will need to do more than replace one piece of the frame to completely satisfy 1st generation Tundra owners.

Toyota Fixes Pedals, But Upgrading Computers Would Have Been Better

First reported in Japanese newspapers (and now on Reuters and PickupTrucks.com) it looks as if Toyota is voluntarily recalling nearly 3.8 million cars and trucks in order to fix and/or replace the accelerator pedals. If this is indeed the official “fix” (Toyota has yet to announce this formally), it’s a bit disappointing.

Since many Toyota vehicles have electronic throttle controls, a software upgrade to the engine management system would cure this issue. A software upgrade that prevents a vehicle from operating at full throttle whenever the brake is depressed would almost completely eliminate the possibility that a vehicle could careen out of control because of a stuck throttle. Chrysler and Mercedes-Benz vehicles with electronic throttles already have this feature – it’s called a “brake to idle failsafe” – but Toyota, Lexus, and Scion vehicles do not. 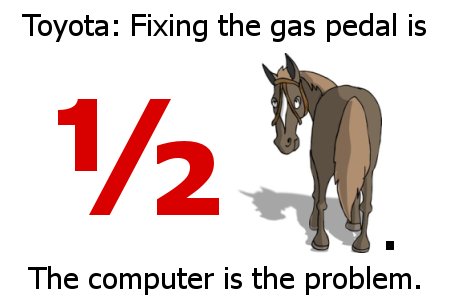 New gas pedals are probably a cheaper “solution” to this problem, but they’re not the best way to solve the problem.

NHTSA has officially announced a 2000-2001 Tundra frame rust investigation. According to multiple news sources, Toyota has begun to quietly replace frames and/or buy-out Tundra owners. Whether this is Toyota deciding to act in good faith or an attempt to avoid an embarrassing safety recall is hard to say, but the good news is that 2000-2001 Tundra owners with rusted frames are finally going to get consideration from Toyota.