As we’ve mentioned before, some Tundra owners have trouble with “bed bounce.” While it’s a problem that effects only a small percentage of Tundra owners, it’s a big deal for the people it does effect. To be clear, bed bounce is NOT bed flex that you can see out your rear-view mirror as you’re driving down the road. Bed flex is normal – every truck bed “floats” separate of the cab by design. True bed bounce is not just seen but actually felt. SO, if you aren’t feeling it, then you don’t have a problem.

This video from Willybar demonstrates their product pretty nicely, but it also demonstrates real bed bounce quite well.

We haven’t reviewed the product, but this video makes a compelling case for checking it out. Here’s a link to Willybar’s website.

Rick, one of the admins of FriendSite.com (a pretty cool social network, btw) created a paint quality petition. Here’s what it says:

“By May or June I had taken my 1st freeway drive to Palm Spring, California and I was very concerned about this bouncing problem I experienced, so I contacted Toyota. They gave me a case number, said they were aware of the situation, and that they were working on a fix.

By September 2007 I had enough of waiting for Toyota, so I went to Manhattan Beach Toyota and spoke with the owner regarding this concern. Again, I got the same answer that Toyota had given me. I then asked about the dealership buying back my truck. Since I paid $27,000 out the door a few months ago, I figured I could get most of my money back. They told me that Toyota’s have high resale value when I bought the truck, so imagine my surprise when their offer for a 6-month-old truck was only $16,000!

I then filed complaints with the State of California DMV, Department of Transportation, Department of Consumer Affairs, a Lemon Law Lawyer, and, after all of this work on my part, the official Toyota arbitration process was started.

The Details: From Toyota’s press release “On certain 2007 model year Tundra vehicles, there is a possibility that a joint in the rear propeller shaft may have been improperly heat treated, resulting in insufficient hardness. In the worst case, a section of the rear propeller shaft may separate at the joint. There has been one case reported among all affected vehicles that may relate to this condition. The one case involved abnormal noise and did not involve an accident.”

Symptoms: According to the press release, an “abnormal noise” led to Toyota finding the problem. While there are literally hundreds of things that can cause an “abnormal noise”, you might want to contact your local Toyota dealer if your 4WD Tundra is exhibiting signs of rear-end noise that varies with RPM.

Am I Effected? If your trucks is part of the recall, you will be notified via first class mail beginning in late-December 2007. If you receive a recall notice you should contact your local Toyota dealer to schedule an inspection. If the inspection indicates the shaft wasn’t properly heat treated, the shaft will be replaced. This recall does NOT effect all 4×4 Tundras as some media outlets have insinuated.

Contact the Toyota Customer Experience Center at 1-800-331-4331 if you have questions, but you will be notified if your vehicle is suspected to have the defect. Again, this does not effect all 4wd Tundras. 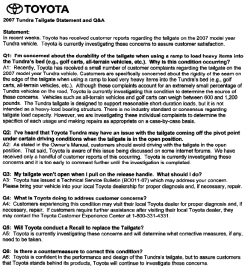