We received an email last week from a new owner of a 2008 4.7 DoubleCab “Tundra Grade” Tundra. The new owner is very happy with his truck, but he’s got a problem – no keyless entry.

As I’m sure everyone knows, Toyota began offering the “Tundra Grade” package on the Tundra for the 2008 model year. The package, designed to compete with work truck packages offered by Ford, GM, and Dodge, strips the Tundra of a few standard features in exchange for a discount. Here’s what’s taken off the standard truck when you buy a Tundra Grade:

Tundra Grade trucks also qualify for special rebates and incentives that drop the price some more. So, if you don’t need any of that stuff, it’s probably a great deal.

So if you want keyless entry installed on your “Tundra Grade” Tundra, consider visiting your local Circuit City, Car Toys, or similar. Any good car stereo install shop will be able to add a decent after market keyless entry system for as little as $100. For $200-$300, you can also have an alarm and/or a remote starter. You can also ask our dealership if they recommend anyone and if they can get you dealer price – most sales managers are happy to give you this information.

NOTE: When we were initially asked, we made a mistake here at TundraHQ and told this person that he could get keyless installed, provided he had a V8 Tundra. Our apologies.

Toyota, in response to large dealer inventories of the new Toyota Tundra and Toyota Sequoia, has cut back production slightly for an indefinite period.

The specific numbers aren’t known, but the rumor is production is being cut by a little more than 10%. That would put the annual production figure between 200k and 225k units. Depending upon summer sales, it’s possible that number could be cut further.

We’re not exactly sure what this contingency money really represents, but it sounds pretty cool. Toyota is putting some extra money up for competitive anglers – as much as $7,500 for the highest placing eligible entrant (note: Toyota/Sequoia owners are not required to win anything, just place). Most local competitions will offer something to the highest placing owner of a Tundra or Sequoia tow vehicle.

There’s no entry fee either – the definition of “free money”. All you have to do is register.

Learn more about this program on BassZone.com.

Incidentally, Toyota has been doing a lot to sponsor fishing as part of their marketing for the Tundra. Anyone care to share their opinion on this marketing technique? Is it smart and authentic, or does it come across as disingenuous? Comments?

According to JapanToday.com, Toyota announced the development of the world’s first car seat fabric agent that stops 98% of dust mites from becoming active. Toyota intends to begin offering this new treatment on vehicles sold in Japan in the next few years. 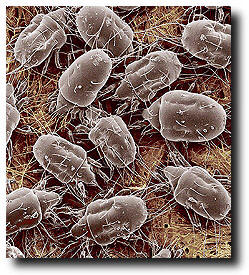 Dust mites, while technically harmless, are definitely very gnarly-looking creatures. These microscopic beasts account for a substantial portion of the world’s dust (10-20% according to EHSO.com)- mostly because they’re constantly shedding their skin and leaving their feces wherever they please. Even worse, dust mites are suspected of contributing to asthma, eczema, hay fever, and other common allergies. Mites particularly enjoy living in places where your body rests on fabric (like mattresses and car seats).

Private Eyes Are Watching You. Are You Paying Attention?

Sorry to pull out the corny Hall & Oates lyrics, but it made me laugh…Toyota has announced they will integrate “eye monitoring” into a new safety system designed to measure if a driver eye’s are looking at the road. Combining this data with crash detection systems, Toyota’s goal is to determine if you’re paying attention to what’s going on. If the vehicle determines you’re not looking at the road, the vehicle will automatically apply brakes, pre-tension safety belts, etc., in order to prepare for a crash.

There are a few problems with this system. First of all, calibrating this system for different people will be difficult. Anyone wearing eyeglasses, sunglasses, different skin tones, light differences caused by people wearing hats, makeup, etc., would all present problems. I don’t pretend to know exactly how this system works, but I would imagine it depends on a computer’s ability to differentiate between light and dark.