We were contacted by Load Control Systems a few weeks ago about their product TarpX. Intrigued, we did a little investigating. Here’s the low-down on TarpX. 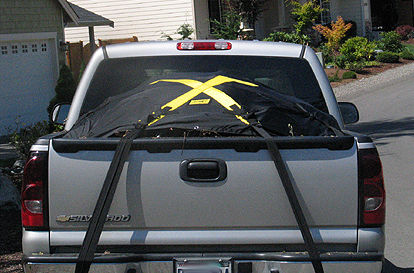 TarpX on a full-size truck.

If you live in an area that sees harsh winter conditions, then you know what a hassle it can be to dig out your driveway after a heavy dump of snow. Even if you have a snow blower, it still takes a considerable amount of time to clear a good-sized parking lot or drive

Every once in a while we get a chance to talk about a cool product made by someone we know. Nick, one of the members of TundraNetwork, has been making his own wooden shift knobs for his Tundra, and when he posted some photos of the shift knobs on his TundraNetwork profile, we had to ask about them. 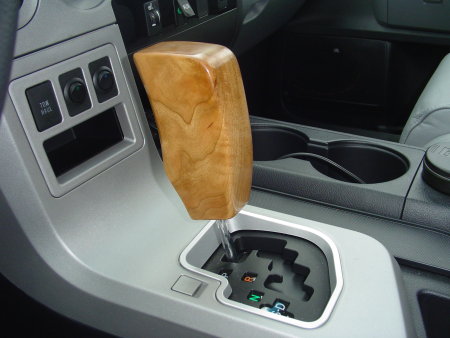 A custom Cherry wooden shift knob in a Tundra.

Here’s what Nick has to say:

Q: How did you become interested in woodworking and when did automotive accessories become part of your repertoire?

Heavy duty suspension systems are a key component of being able to tow large trailers or haul massive amounts of cargo safely and with full control. Springs which are designed to facilitate this kind of driving while fully loaded are able to maintain their height under the mass of whatever is being moved. This keeps a truck level and helps the entire suspension system perform at its best without sacrificing any control while cornering or braking. Unfortunately, in order to exhibit this characteristic, heavy springs must be extremely stiff, which makes the vehicle subject to a harsher, bouncier ride when not under load.

From left to right, a visual explanation of the benefits of an air-lift suspension system.

ARB Sahara Bumper and Bull Bar for the Toyota Tundra

ARB announced a new “modular” Sahara bumper bull-bar combo unit for the 2007-and-up Toyota Tundra just after Thanksgiving, and we completely missed the announcement (until now). ARB, for anyone who doesn’t know, is an Australian company with a (deserved) reputation for building top-quality off road gear. They’re especially well-known for their solid steel winch bumpers that offer a great mounting surface for a winch, Hi-Lift jacking points, and enough steel to blast thru almost any obstacle.

The new Sahara bar offers a chrome hoop top bar that installs above the bumper. The idea is that the grill and hood (and the radiator underneath) aren’t quite protected by the solid steel bumper, so adding the hoop bar is a way to protect some more of the truck’s vitals. Of course the hoop bar looks pretty good, so that’s another reason to consider it. 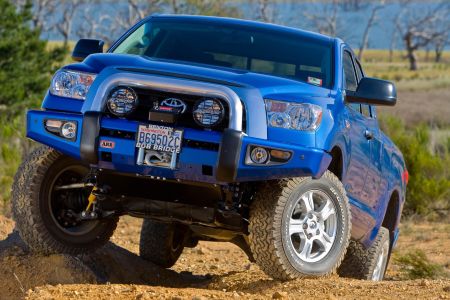 The Sahara Bar from ARB is now available on the 2007 and up Toyota Tundra. You can find them at 4WheelParts.com.