With gas prices being what they are, many people are looking for low-cost modifications that they can make to their trucks in order to squeeze every possible mile out of a gallon of gas. There are a number of gadgets, additives and devices out there that try to separate drivers from their money with pie in the sky claims, but there are also some ideas and products which seem like genuine, well-researched solutions. Low-rolling resistance tires are an example of a well-researched fuel saving device.

A little bit of background: the tires on your truck are designed to be a balance between several different performance characteristics. They need to be able to stick to the road in order to provide traction, but they can’t be too sticky, or the engine will have to work that much harder in order to overcome the friction they create. They also need to be made of a material that is soft enough to provide traction yet still wears well, and is capable of lasting for tens of thousands of miles. Finally, the size of the tire and the depth of the tread also contribute to how much energy it takes to get the tire moving, with taller wheels generally requiring more energy. The same is true of knobbier, deeper tread patterns, such as those found on off-road tires.

Well, yes and no. Unfortunately, due to the most commonly used methods of reducing a tire’s rolling resistance, there is a rather significant safety trade off when it comes to grip and stopping power. Since the primary technique used in creating low-rolling resistance tires is to use less rubber and more filler in the tire itself, there is less traction available to your vehicle, and this means that stopping distances increase dramatically. Not only that, but wet weather traction is also reduced, putting you at risk in sharp corners and in heavy breaking situations under rainy conditions.

This isn’t the kind of trade-off most people are willing to make just to save a few bucks at the fuel pump. Fortunately, there are other ways to reduce the rolling resistance of your truck’s standard tires that don’t introduce any safety concerns. Since the size of a tire’s overall diameter contributes to the amount of rolling resistance that must be overcome, you should avoid running oversized, off-road tires on a daily driven vehicle. A smaller tire with a less aggressive tread pattern will help get your truck moving with a lot less effort – not to mention the money you will save on tread wear. A truck with better matched tires will also handle in a safer fashion on asphalt. If you are really concerned about your truck’s rolling resistance, then it’s better to save the swampers for off-road use only.

NOTE: Making sure that your tires are properly inflated (35 PSI is a good number for most uses) ensures that your tires aren’t causing any more resistance than necessary. Under-inflated tires generate more friction, reducing fuel economy and tire life.

Build Your Own Electrical Grounding System

Jeremy, one of the top contributors on TundraNetwork, posted this article about adding your own Hyperground-type electrical grounding system to your truck on the Tundra forum, and we decided it was so good it deserved placement on the blog. Thanks a lot Jeremy for sharing!

By the way, Jeremy’s truck now idles at a lower RPM and his gas mileage has improved about 0.5mpg after adding this kit. 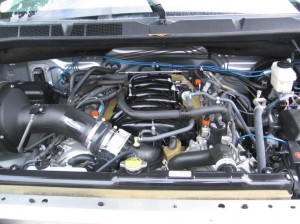 Here is what you will need: (I found all the parts at my local megamart)

Alan just sent us an email alerting us to the new official Toyota tonneau cover for the 07-08 Tundra. Evidently, it’s so new that many dealers haven’t heard about it yet. Here’s what we were able to get our hands on: 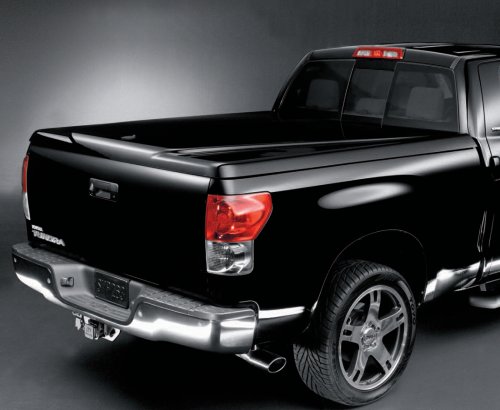 Here’s an image from the brochure for Toyota’s official tonneau cover for the Tundra. Note the single recessed lock mounted rear center. While there’s only one lock, there are dual latches for extra security.

One of Toyota’s newest accessories for the Tundra, the tonneau cover is available in a variety of colors (all exact matches of new Toyota paint). It has a smooth, polished factory finish and it’s covered by Toyota’s standard 3 year/36 mile warranty. The single center lock is recessed into the cover so it doesn’t take away from the appearance, and there’s a detachable battery powered LED light under the lid that can either serve as a cargo light or be carried around as an emergency flashlight. Opening and closing the tonneau is assisted by two gas struts, and Toyota has certified that the tonneau is weather and water proof. Detaching the cover is supposed to be quick and easy – the latching mechanism just ‘snaps’ in and out. It’s also supposed to be very lightweight.

Aftermarket lights are a popular addition that many pickup truck owners make to their vehicles. If outfitted with a brush guard, bull bar or roll bar, your Tundra has plenty of places where you could mount auxiliary lighting. Even if your truck is bone stock on the outside, you can still mount lights under or on the front and rear bumpers in order to increase your visibility at night or in inclement weather. There are three main types of lights on the market. Let

Stay Away From Throttle Body Spacers

The engine in your Tundra is essentially a giant air pump – the more air that you can get into your motor, the more fuel that can be mixed with it and then combusted in order to generate more horsepower. There are a lot of different methods out there designed to help an engine “breathe” and maximize its power potential. Truck owners install performance air filters, cold air intakes, and even superchargers in order to get the most airflow possible, all in a chase for that extra horsepower edge.

There are some products out there that claim to be able to improve on the already significant engineering that has gone into your motor. Some of these products, like performance air filters and cold air intakes, work as advertised. These accessories improve performance because they trade an increase in performance for an increase in something else. In the case of air flow, it’s usually a trade between increased engine noise and an increase in power (not to mention expense).

Unfortunately, these usually simple enhancements sometimes claim excessive increases in horsepower and fuel mileage. We’ve tested a few cold air intakes and none of them matched the results printed on the box. Having said that, none of them disappointed us. However, one device that we have a hard time endorsing is known as a throttle body spacer.