Why You Really Can’t Special Order a Toyota

Recently Al-Futtaim Motors based in Dubai, UAE, was featured in an article talking about how they are starting to offer custom Toyota vehicles to their customers. Obviously this grabbed our attention, but is it true? 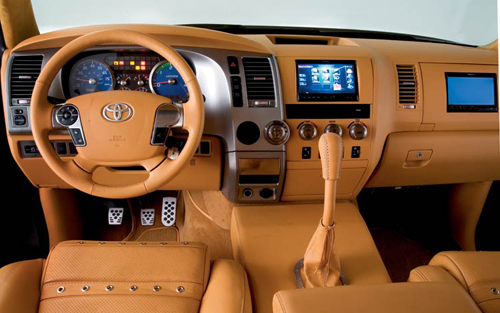 Ordering a custom built Tundra to your exact specs sounds cool, but it really isn't an option.

Technically, customizing a product is called bespoking. And there are some examples of bespoking throughout the automotive industry especially in luxury and high-performance bands. The article states that “Al-Futtaim Motors (AFM) is working on a bespoke solution that would allow new Toyota owners to customise (sic) their vehicles to a good extent.”

Why doesn’t this makes sense to us? We have long understood that very smart Toyota planners develop a master production plan in anticipation of what the market is going to want. Parts are then ordered from suppliers based on Toyota’s master product plan; i.e., if Toyota determines that 10% of Tundra owners will want moonroofs, they call the moonroof supplier and order a specific volume of roofs based on that number.

If/when a dealer orders a vehicle, all Toyota will do is try to match the order against a truck that was already going to be built. If a dealer orders a configuration that Toyota never planned for (like, for example, a regular cab with leather), the truck NEVER gets built. The plan is paramount, and orders that don’t fit the plan don’t get filled.

There are opportunities to fix the plan at certain points in the year. For instance, if the demand for moon roofs exceeds expectations, Toyota can re-do their plan during production. This could also happen if enough dealers order the same unique configuration.

The advantages in this system are obvious: The limited number of configurations reduces the complexity of the assembly process (reducing error and improving quality), and because there’s a master plan, parts from suppliers are used the day they arrive and Toyota never ever buys more parts than they need.

The disadvantage is that, unlike Ford and GM (and Ram), it’s impossible for a customer to special-order a Toyota. Ford, GM, and Ram use many of the same processes, but they’re a lot more flexible in terms of what they’re willing to build, so customers are much more likely to get exactly what they want.

There is a bit of a work-around, however, and it’s referred to by Toyota as a port installed option. Basically, Toyota will add additional options to a vehicle at the “port” (which could be an actual port, but could also be a distribution point inside the U.S.). These options are easy to install items like exhaust systems, floor mats, and other accessories.

Thus, we are thinking that AFM is basically talking about port installing some options that customers want above and beyond what they already do. Considering how easy it is to add a leather interior to a car, a sunroof, a new stereo, etc., there’s quite a bit that can be done under the guise of port installation.