One of the interesting evolutions in the past decade is how our expectations of truck quality have changed. It used to be if you got 100k miles out of a truck, you were doing good. Now days, things have escalated to the point where every item is a mark on the entire truck’s quality. Is this fair or unfair? 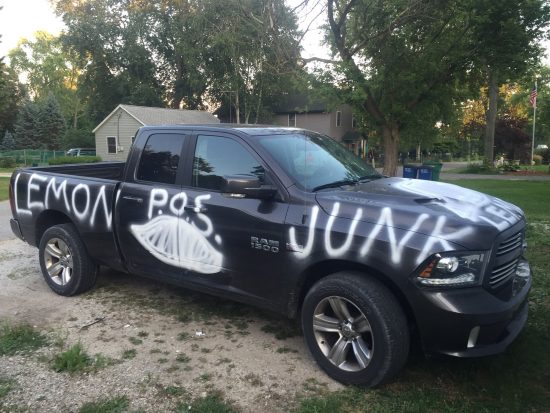 Every owner’s truck experience varies, but this owner’s response is a bit overboard in our opinion.

I don’t know the back story on the picture above and I’m not really that interested to know. Why? My thinking is if someone is willing to do that to their truck, they obviously are acting irrationally and it is hard to take anything they say for certain. Essentially, this destroys their credibility for me.

However, this isn’t to say they don’t have a valid issue. For me, it is how you define “valid.”

For me, I think of major powertrain issues as reasons for something to be a lemon. That is an expensive repair and is what I would consider major. Other issues liking door latches not working, replacing engine parts or interior trim/seat issues, just aren’t that high for me. Everybody is different, but all of those items can be fixed or replaced at low cost.

Now, I do agree we all see things differently. For example, when Toyota was developing the 2014 model, I remember their team relaying the story about a focus group of non-Toyota owners they had assembled. One lady stood out by saying she loved her pickup and how reliable it was.

“I’m only on my third transmission,” she said as Toyota’s PR told me. “Its been a really great truck!”

Toyota engineers were floored by her response. Yet, again, people perceive things differently.

I think NO QDR Tundra is another example of people’s different expectations. He has been a long-time supporter of THQ and a major commenter. Unfortunately, he owns a truck that he doesn’t feel has great QDR (Quality, Reliability, Durability). Yet, when I look over his issues, I have a different opinion. Let’s look over them here and people can weigh in.

Now, let’s remove all the TSB items since TSB repairs are common on any vehicle these days and really no manufacture has complete control over that. They try to, but when you have hundreds of parts and dozens of suppliers, things are just going to happen. It would be like calling out Honda’s quality due to Takata air bags. We just don’t do that.

Then, let’s remove the items that aren’t related to Toyota – the bug shield. This is an aftermarket addition.

Finally, let’s remove all the items covered under warranty since these were no cost to the owner. Sure, the owner had to take the truck to a dealer, but every truck out there has an issue here and there including the Million Mile Tundra.

The rest of the items were either covered under warranty or of minimal expense. For example, the rear axle seal was $12.50.

Now, the paint issue was a warranty issue that the owner declined to have the dealer fix.

The Heater Box Evaporator is a true issue. I’ll give the owner that. It cost $1062.59 to replace.

However, I know he has an extended warranty through his discussions with Toyota and I’m not sure why that part isn’t covered.

I spoke with Sweers about the No QDR site at a dinner a while back. He response was one of surprise and after going through the list, he verbally commented with either TSB or not Toyota. I tend to agree with Sweers. Looking over the list I don’t see many issues that aren’t either a TSB or a non-Toyota problem. Also, the other items should have been warranty items.

Now, to be fair, NoQDR has valid points on the amount of times he has been in for service – 12 in 3 1/2 years. No argument there. 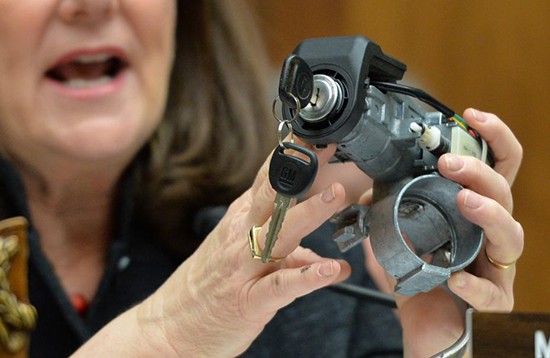 Remember when this was a big issue?

Something I openly wonder these days is whether all the recalls are to blame for changing expectations. Remember last year when GM was recalled trucks for all sorts of issues. Like a bolt wasn’t tightened a quarter turn and they would issue a recall!

This, in my opinion, was a great way to cover up the fact they were dealing with the massive ignition switch issue. But, did it also create a world where we hold vehicles up to a higher standard? Do we know expect vehicles to be without any issues ever coming off the assembly line?

I grew up in Michigan and I vividly remember hearing my friends say product X has a Y problem that will go out at Z miles and you will have to fix it. Like we knew exactly when the odometer hit a certain mileage that a part would fail. Ad: Motorcycle Racing Fairings | Bike Fairings – Superbikes Seems a bit absurd now to think that way, but we did.

At the end of the day, these trucks are filled with thousands of parts, safety equipment and technology. The fact they turn over everyday should be a miracle with all the moving parts.

Yes, I realize this is opening a can of worms, yet let’s look at the facts. Toyota consistently wins quality awards and is still (for the most part) well thought of for quality. In fact, looking at Toyota Tundra owners list of complaints on CarComplaints.com, we can see out of the three “worst problems,” two of them are covered under TSBs. The other, premature transmission failure, has been reported by 2 people and this issue is covered under warranty. Over the past 3 model years, the Toyota Tundra has 22 reported complaints. Is that a lot? 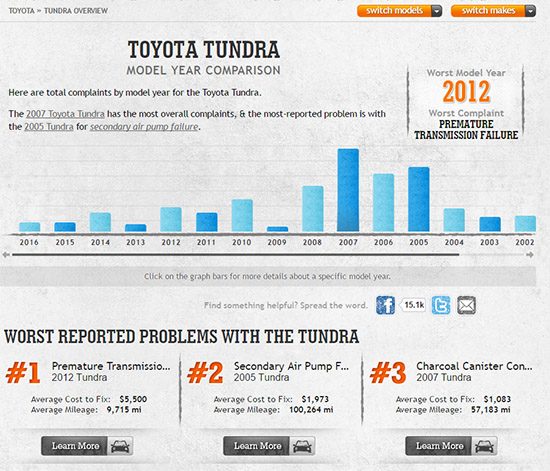 Again, the Toyota Tundra had 22 complaints during the same time period.

The final point to be made is about truck prices. Is there escalation causing us to hold trucks to a higher standard? Is that fair or unfair? Seems like if trucks were cheaper, maybe we would let more things go? Consider NO QDR who states in his opening paragraph the truck’s price and how he feels he hasn’t gotten his money worth. Are the high prices causing this unintended by-product?

Your turn to sound off. What do you think? Are we fair or unfair when we look at quality? Is the price really to blame?