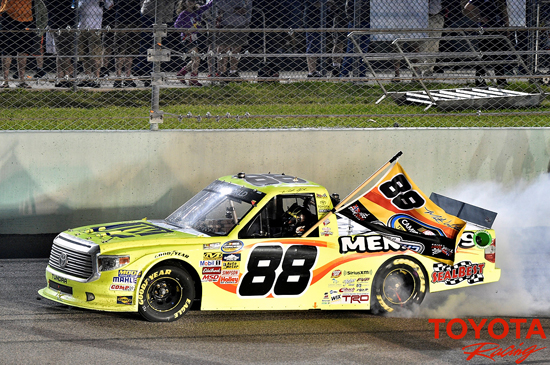 Crafton wrapped up the title on Friday night when he finished ninth. With his placement in the title hunt and the points from the race finish, he won the overall title.

For the year, Crafton won twice – Martinsville (March 3) and Texas (June 6) and recorded 13 top-five finishes as well as 17 top-10 results in 22 races. He never trailed in the points standing after the September Chicagoland Speedway race.

“To say I made history is definitely very, very cool, but it’s all about the guys at ThorSport Racing that are behind me,” said Crafton, following the race. “Without them, I’m just an average race car driver at best. It’s all about the truck that these guys put underneath me each and every week. This Menards Toyota Tundra has been really — it’s been unbelievable to drive every week this year.”

During the 2014 season, Tundra drivers established a series record with 12 consecutive race wins including the first 10 races of the season and the last two events of 2013. Along with the record for consecutive victories, Tundra drivers totaled 18 wins this year — equals the single-season record for wins by one manufacturer in the series. The victories enabled Toyota to secure a seventh NCWTS manufacturer’s championship (2006-2010, 2013-2014) in 11 seasons participating in the series (2004-2014).

Tundra drivers have earned a total of 130 victories since joining the series in 2004.

The 2015 NCWTS season will began at Daytona International Speedway, Feb. 20.