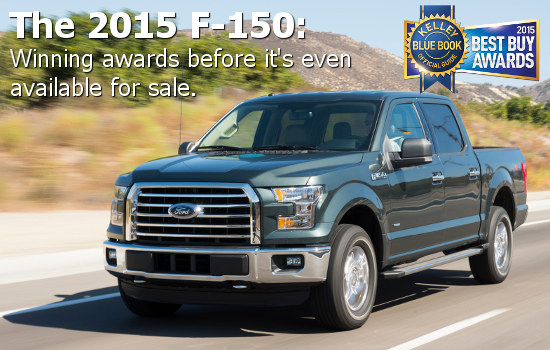 2015 F-150 wins a KBB Best Buy Award…before we even know what the EPA fuel economy rating is. Amazing!

“Our group of expert vehicle testers chose the Ford F-150 as the Overall Winner in our Best Buy Awards because of its breakthrough aluminum body structure, its smooth and fuel-efficient powertrains and its impressive collection of thoughtful features. Offered in a wide variety of body styles and with a wide variety of engines, it is a suitable vehicle for a broad cross-section of the public, and the final piece is the F-150 is available for about the same price as the previous generation truck, which was a bestseller.”

First, let’s point out the the F-150 has always been available in a “wide variety of body styles with a wide variety of engines.” Hopefully, KBB isn’t weighing that factor too heavily.

Second, it’s true that the 2015 F-150 has a cutting-edge aluminum design, and it’s true that some of the new features (like the new fob-activated tailgate drop, or the integrated LED bed lamps) are cool. But the fuel efficiency of the powertrains is TBD, and the early estimates (5-20% better fuel economy) generate more questions than answers.

It might come across as sour grapes, but handing out an award on the basis of test-driving pre-production trucks – without EPA testing figures announced – seems, ahem, premature. The 2015 F-150 might be the coolest truck that Ford has ever produced, but it’s also the first truck Ford has built using rivets and glue.

Maybe KBB.com could wait until the truck has a year under it’s belt before declaring it a “best buy?” Potenzmittel ohne Rezept