Toyota has announced it will expand its TRD brand to the Camry and possibly other models. This expansion is incredibly smart and gives Toyota a competitive marketing advantage. It also helps them reach a younger demographic all automakers are struggling with. 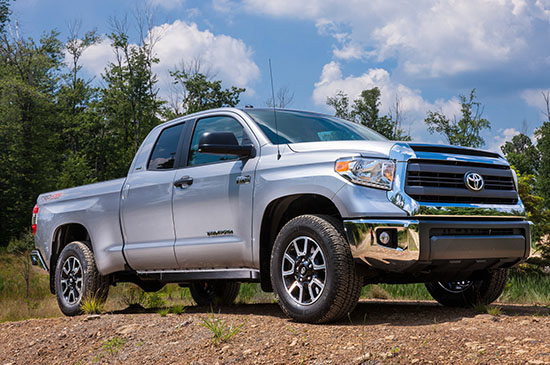 The TRD package has been a great offering for Toyota’s trucks. Now, they will build on it by leveraging the name on other vehicles. This is incredibly smart.

Officially, Bill Fay, Toyota USA’s general manager, told AutoNews at the Detroit Auto Show, they were looking at spreading the brand to other models.

“I think we’d probably start with Camry and see if there is a little magic we could work with some of the TRD equity that we have,” Bill Fay said. “Camrys are out there during season racing every Saturday and Sunday in NASCAR. So I think there’s a logical fit there.”

Fay went on to say they may have the special Camry ready by 2016. Also, they have been kicking this idea around for a while with several TRD tricked out models appearing at SEMA and elsewhere. (You may have seen or remember this NASCAR styled Camry at the 2010 SEMA show.)

Now, it almost goes without saying, a Camry TRD wouldn’t be appealing to the typical Camry buyer. However, Toyota is seeing this brand making inroads with the historically hard to reach younger buyers. Toyota’s Bob Carter, Senior Vice President for Toyota USA, confirmed this appeal to AutoNews.

In case you didn’t know, the SE is considered the sportier version.

When it comes to trucks, the TRD offerings in the Tundra, Tacoma and 4Runner have been pretty successful and have brought in many younger buyers. They are also popular with dealers since they sell at a higher price and with more profit.

A quick recap for those who don’t know. TRD stands for Toyota Racing Development. They have built a history of off-road excellence through many events including the Baja off-road races. Recently, they teamed up with Ivan “Ironman” Steward to drive a 2015 Toyota Tundra TRD PRO to a Baja 1000 victory.

The TRD PRO is basically an even more capable version of the TRD. We have all details on this truck here.

When Toyota announced nearly 40 percent of their Tacoma customers opt a TRD package, we wondered if this was driven by dealers as well. Dealers aren’t dummies and they know customers, especially younger buyers, love performance models. We see this all the time at dealerships who customize trucks or park them on rocks or boulders to show their toughness. Are these trucks stock models? Heck no, they are the more expensive and more profitable TRD packaged models. These trucks draw in customers who love the look of these models. Once they are in the dealership, do you think the sales person tries to sell them on a non-TRD model? No? Neither do we.

We did some research on Cars.com to see what is out there and to confirm our suspicion. With our parameters of a 2015 Toyota Tundra, 50 miles from zip code 80260 (Denver, CO) our official headquarters, we found 228 trucks including 1794, Platinum, Limited and SR5. With the TRD package only being offered on Limited and SR5 models, we eliminated the 1794 and Platinum editions. Then, we looked over the first 50 trucks that met our criteria. We found 23 SR5 models and 29 Limited models within a price range of roughly $47,500 to $42,000. This gave us a pretty good assortment of trucks and we felt it was a good sample. Plus, the average truck transaction has risen to around $40k in the past year and with trade in value or cash down, we figure the majority of buyers are looking in this range.

Out of those 23 SR5 models, we found 16 had the TRD package. There were 5 models that were dealer special types with 20′ Fuel Wheels, 3′ Pro-comp lift, Toyo A/T Tires, N-Fab step bars and Katzkin leather interior among other things. This left us with just 2 plain jane SR5 models.

In the introduction, we told you expanding the TRD brand gives Toyota a competitive advantage. What do we mean by this? Simple. They have a consistent, strong performance brand across their lineup that other automakers don’t have.

Hold on you say. What about Ford and their Raptor? How about Dodge and their R/T models? What about Mopar? Or Chevy and their Z71? Those are all good points, but they aren’t a strong, unified brand. Here is what we mean.

Offering a consistent performance brand names allows Toyota to market their vehicles smarter and reduces customer confusion. This is just plain smart marketing. Customers can go to a Toyota lot and immediately decipher the difference between trim levels. They will see marketing aimed at TRD performance products and find cars/trucks with this badging. Also, they can shop the parts shop at a dealer and find all sorts of TRD badged items to add to their vehicle. This creates a simplistic brand that is easy to identify and shop. For the manufacture, this means less marketing costs by promoting one brand and additional profit from selling TRD badged accessories.

What about the others? Let’s look.

Ford – If you looked closely at the new Raptor, GT and Shelby Mustang unveiled at the Detroit Auto Show, you would have seen the beginning of Ford’s strategy. They dumped the SVT moniker on the Raptor and instead branded all the vehicles “Ford Performance.” Why? They are trying to follow Toyota and create a consistent performance branding message.

GM  – For years, Chevy has had their Z lineup to mark their performance brand. Whether it is a Z71 in the Silverado or the Z28 in the Camaro, the Z brand means Chevy performance. The problem with is it gets a bit confusing. Customers have to remember what number means what. For example, Chevy showed off a ZR2 Colorado at the LA Auto Show. Now, without using Google, who knows the difference between the ZR2 and the ZR1? Give up? We had to Google it too.

What about GMC? Oh yeah, that’s the Denali lineup which you can’t get on a Chevy. You can get it on the Yukon and Sierra – remember those are GMC products and not Chevy products.

To recap, you can’t get the luxurious Denali trim on a Chevy, but you can get the High Country which is like the Denali. And if you want more performance, you must buy a Chevy because you can’t get a GMC Sierra Z71 that would just be silly! Nor can you get a Chevy Tahoe Denali, but you can get a GMC Yukon Denali – just not in a Z28 package. Confused yet? So are we.

Lastly, while a Chevy Silverado Z71 or a GMC Sierra Denali may make perfect sense to you, imagine a new generation of buyers coming. They don’t remember when these packages first came out nor do they have the same automotive background. From a marketer’s perspective this is not good.

Ram – While Ram is really expanding their truck offerings, a consistent performance brand is something they are lacking. Sure, they have the Ram Express and the new Ram Rebel which you can outfit with Mopar parts, it is quite a mouthful. Can you imagine telling your buddies you drive a Ram 1500 Express Mopar? Doesn’t really roll off the tongue. Ram’s problem is Mopar. Mopar is really a strong brand with a rich heritage. But, it really hasn’t been utilized well on their products. In truth, Dodge is starting to do this really well with Mopar customized products at auto shows. Yet, they get confusing with their R/T, Hellcat and SRT (remember the Ram SRT pickup?) Like GM, Ram gets a little crazy with all the names.

Nissan – Now, Nissan does a pretty good job with their Nismo and PRO 4-X. These two names make it pretty simple for the consumer and it is easier to market. Yet, they don’t  have/market the rich heritage that the TRD team has built over the years.

Add everything up and it is pretty apparent how Toyota’s TRD brand will help them market their products and gives them a competitive marketing advantage with its simplistic. While others may scoff at the TRD name (say it as a word really fast and act juvenile), Toyota is riding that name to the bank.