Are Towing Numbers Getting Out of Hand?

The new F-450 has claimed the maximum towing title with a capacity of 31,200 lbs, a startling amount when you consider that the same vehicle was rated to tow just 16,700lbs a decade ago. 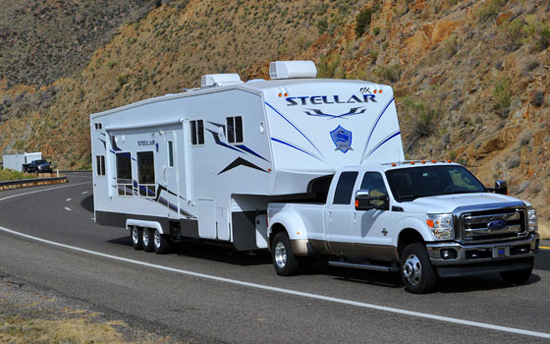 Is Ford’s F-450 Too Much Truck For Private Use? Photo by: Sam VarnHagen/Ford Motor Co

While almost doubling tow capacity in 10 years is an impressive accomplishment for Ford, is it a safety concern for the rest of us? After all, standard driver’s education classes don’t prepare people for towing 2,000lbs, let alone 30,000lbs. Should Ford be allowed to sell an F-450 to anyone off the street?

In order to reach these numbers, Ford has made improvements to the engine and chassis to handle this much towing capacity. While their inside-out arrangement for intake and exhaust on the new Power Stroke is innovative (and boosts performance considerably), at what point are tow ratings too high?

Remember: the average truck owner has no supervised towing experience or training. Most of us learn from a family member or friend, then hop into the driver’s seat and hope for the best. While this usually works out just fine, there are problems with “regular Joes” pulling trailers.

With more powerful trucks giving driver’s a false sense of confidence, will we see more accidents?

Automotive journalist and former truck driver Aaron Turpen suggest that our concerns about massive tow ratings might be misplaced.

“31,000 pounds is a lot of weight, but since most buyers of the F-450 are very likely to be commercial buyers rather than private, I doubt this is a big issue,” says Turpen. “I can’t imagine very many buyers who would buy this truck and actually use it at that capacity privately.”

Aaron Turpen may be right about the average F-350 or F-450 buyer being a commercial user, as it’s relatively hard to find a trailer that weighs much more than 20k lbs that could concievably be for private use.

While these particular setups are considerably more heavy than the average travel trailer, horse trailer, or car hauler, they’re not exactly unheard of. It’s conceivable that a relative neophyte could end up behind the wheel of an F-350 or F-450 pulling 10 tons.

In order to approach the 30k lbs weight limit, you probably need a commercial trailer…at least until the trailer manufacturers start building bigger and heavier trailers for private use.

Since most F-450 buyers are probably going to be commercial users anyways, and since most CDL regulations would seem to be applicable to the F-450, why not make sure F-450 buyers have a CDL? Or perhaps even F-350 buyers who opt for the max trailer towing package?

According to Aaron Turpen, a commercial driver’s license is only needed if the load being hauled is commercial…almost regardless of weight or length. It’s sort of shocking when you think about it, because it basically means that anyone can drive a truck with a massive trailer without any special training or certifcations, provided the setup is for private use.

For reference, here are the Class A and B CDL levels for Colorado (CDL rules vary by state):

Looking at those numbers, it is pretty easy to see how a pulling a large camper, horse trailer, car hauler, etc. would qualify for a CDL. While no one is a fan of increased rules and regulations, the case for making F-450 buyers get a CDL seems pretty clear cut. The max tow rating of the F-450 combined with the vehicle’s weight exceeds the 26k pound limit by quite a bit (at least 10k lbs).

What About Private F-350 Drivers? Do They Need a CDL?

Considering that commercial drivers piloting more than 26k lbs of trailer and vehicle need a special license, it’s logical to wonder if anyone driving an F-350 with the max. tow package needs a CDL as well.

“Honestly, those who drive non-commercial big vehicles like that are often far safer than are the professionals simply due to the fact that they don’t do it as often (aren’t as comfortable) and probably don’t go nearly as far or drive for nearly as long,” offers Turpen. “It’s only when they’re parking and/or backing up that they’re a problem.”

While Aaron’s experience and expertise is on point here, it’s important to understand that truck makers are constantly adding features designed to make towing easier. At some point, these features might give drivers a false sense of confidence, and that could lead to big problems.

What do you think – do F-450 buyers need a CDL? What about F-350 buyers who opt for dual rear wheels and the max tow package?