Editor’s note: This post was written by request from our audience. Have a story you want to see? Send us an email and we will work on it.

The Toyota Tundra is the only full-size truck that uses the J2807 standard for determining its towing rating. What does that mean and how does SAE measure the rating? 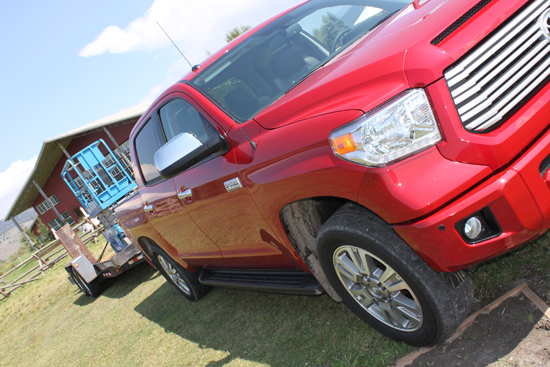 When you tow a load in a Toyota Tundra, rest assured it will tow what it says it will.

For years, the towing rating for full-size trucks has been more of a gimmick than a factual number. Many, many times manufactures would simply use it as a bragging right. And quite often, trucks would “magically” have increased numbers with a new model without any mechanical changes.

Toyota has always been known for safety and it isn’t surprising that in 2010, they adopted the standard for their 2011 trucks. This was a bit of a gamble for Toyota with the towing ratings of its truck being revised lower than previous models. However, they know have bragging rights as the ONLY manufacture that is J2807 complaint.

For reference, the J2807 standard has many names. Toyota calls it the “truth in towing” standard. The Society of American Engineers says it is actually, “Performance Requirements for Determining Tow-Vehicle Gross Combination Weight Rating and Trailer Weight Rating.” It was first published in 2008 and since all the other manufactures have said they would be complaint by 2013. Then, they changed their mind once their towing numbers decreased. Why do they decrease?

Famously, manufacturers love to test their vehicles with ridiculous setups. Such as empty beds towing large boats without taking into account the driver.

The J2807 standard is actually really more of a way to set a standard bar for everyone. It uses three different tests and a standard calculation for weight. While, the test is imperfect, it is a good standard for everyone to use.

Acceleration: For any given trailer weight, the tow vehicle needs to accelerate to 30 mph in 12 seconds or less, to 60 in 30 seconds or less, and from 40 to 60 mph over level ground in no more than 18 seconds. Dualies are allowed extra time to meet these requirements.

Climbing: Tow vehicles need to climb the Davis Dam Grade (or an equivalent simulation) – a 3,000-foot run over an 11.4-mile stretch of Arizona State Route 68 southeast of Las Vegas – without dropping below 40 mph and with the air conditioning on full blast. Dualies get it easy again, with a 35-mph minimum speed.

Launching: On a 12-percent grade (an incline that rises 12 feet for every 100 feet of horizontal distance), the tow vehicle must be able to move 16 feet from a standstill five times within five minutes. That’s in the uphill direction, in both forward and reverse.

Weight: The standard specifies that vehicles with a GVWR (gross vehicle weight rating) of less than 8,500 pounds carry a 150-pound driver and a 150-pound passenger. Vehicles above 8,500 pounds add an extra 100 pounds of equipment. If you’re heavier than 150 pounds or carry more gear, deduct that extra weight from the maximum towing figure.

Also tested (thanks to our reader, LJC):

If you want a closer look at the standard, you can purchase it from SAE.org here.

Quite simply, if you are towing in a truck without meeting the J2807 standard, you could be putting yourself, your passengers and your load in danger. Right now, the manufactures who aren’t compliant can claim whatever maximum towing rating they would like. As a consumer, you don’t have the resources to test it for yourself (most likely). This means you have to trust whatever the truck maker states without a third-party objective review.

Many Toyota fans and safety advocates want a safe playing field for all consumers to make a wise decision. With possibly millions of dollars in revenue from sales riding on being the “best in class” towing moniker, it is hard to see manufactures jumping on board (even though everyone was meant to be compliant by 2013).

What do you think it will take for the standard to be universally accepted? A death, a congressional investigation or something else? Or do you never think it will be accepted?