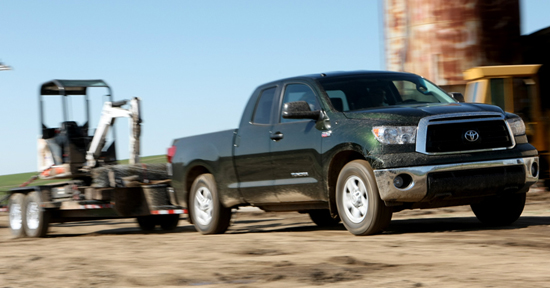 Starting in new 2013 GM/Chevy trucks, the tow ratings will be based on a new SAE system according to a PickupTrucks.com post. This has caused several models of trucks to have “revised” ratings. Standing out in this revision is a four-wheel-drive Extended Cab long bed with the diesel and a 3.73:1 axle. Its 2012 rating was 15,700 pounds, it is now 10,900 pounds (4,800 lbs lower.) While Ford and Chyrsler will be soon to follow, Toyota already uses this standard starting with the 2011 Toyota Tundra. A big question, we had is how does the 2012 Toyota Tundra now stack up to a 2013 GM Sierra 1500 (whose tow rating has dropped 300lbs since last year)?

As the chart shows, the Toyota Tundra with a smaller motor now tows the same as a comparable Sierra thanks to the new, fair SAE standard.

Tow ratings have been an ongoing source of conversation and controversy. Without a true standard, automakers could develop their own rating system. These systems were flawed from the start with many “tests” being performed with an empty pickup and a 150-lb driver. The assumption that you would say tow your boat to the lake with a full-size truck that only had the driver in it, is absurd. It would most likely be filled with supplies and the truck would probably be full of passengers. This meant that the driver needed to take the additional cargo/passenger weight and subtract it against the truck’s towing capacity to determine the true towing rating. Often times, drivers didn’t do this. This is why you would often see an amazing amount of cargo towing a large load in a not so big truck.

A few years ago, SAE engineers, trailer manufacturers and towing dynamics got together to develop a new standard. They eventually settled on a tow-vehicle performance requirement (J2807 standard). There are dozens of tests and measurements included in this standard, but here are the three that will really impact tow ratings and consumers. The following quote is from some sales materials sent to Toyota dealers:

What do you think? If all the manufactures start using the new SAE standards in 2013, will Toyota sell a lot more Tundra pickups?