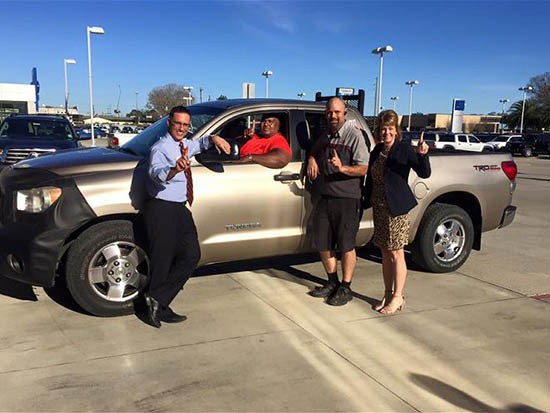 You may remember this story from October 2012 when the truck was shown at the Texas State Fair when it had 666,803 miles on it. Now, the truck has hit the maximum on the odometer at 999,999 and Sheppard is having to use one of the trip meters to keep track of additional mileage.

I interviewed Sheppard for this article on Trucktrend.com. The gist is Sheppard is a hot shot driver delivering oil company supplies and other materials across the country. He is on the road a lot driving from Virginia to Texas to California. As well as heading up to North Dakota.

After all of these miles on the road, amazingly, he only has a few issues with the truck. First, there is a tiny tear on the headliner above the driver’s side. And the intermittent setting on the window wipers isn’t working like it should. Yes, those are the issues.

Besides oil changes and regular maintenance items, he hasn’t had to much in the way of major repair. He did say reverse went out on the transmission, yet it was able to be fixed. In fact, he said that was more his fault when he slid into a ditch. Not the truck’s fault.

All in all, I’d say he has gotten his value out of the truck and then some. He told me he doesn’t have any plans to sell it, but when he needs a new truck. He is for sure getting another Toyota.

Note: I apologize for being a little slow to deliver the update here with a variety of issues taking my attention.