A 2007 Toyota Tundra made an appearance at the 2012 State Fair of Texas Auto Show. The 2007 Tundra isn’t that exciting by itself until you consider the odometer reads 666,803 miles. Holy cow! 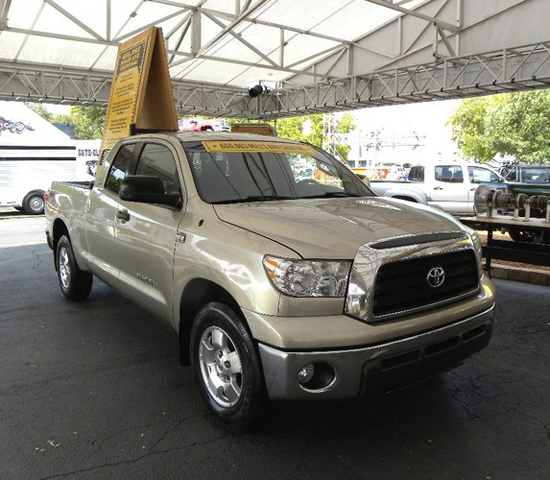 The Examiner.com reports seeing this truck at a special exhibit booth inside the fair. The 2007 Toyota Tundra TRD full-size pickup looks to be in really good condition with “one small fender dent, a slightly damaged tailgate edge.” Not bad for that kind of mileage.  The story goes that the truck is still in fact in service and the plan is to continue using it to reach 1 million miles.

The tailgate has taken a beating, but that is to be expected with Sheppard's courier business. Photo credit: austinautoboomer

The passenger side of the truck still looks good. Photo credit: austinautoboomer

One of the few dents in the whole truck on the front fender. Photo credit: austinautoboomer

The truck is part of Toyota’s marketing efforts to show how tough the Tundra is. I think they proved their point with this truck.

The 2007 Tundra is owned by Victor Sheppard of Houma, La. He says he drives it every day and travels over 200,000 miles per year as part of a courier business.

Sheppard also states that the truck has not had any major repairs or replacements. He says that he simply followed the recommended maintenance schedule and that has allowed his truck to amass the miles without major problems.

Toyota found out about the truck when Sheppard contacted them to see if they might be interested in it to show other people how tough Toyota Tundra trucks are. Of course, Toyota was happy to hear about this truck and designed the exhibit booth with Sheppard’s truck in mind.

The truck will be on display through the end of the fair. Then, Sheppard will get in and keep driving. He is hoping to bring it back to the fair when it reaches 1 million miles. Some quick math says that will be the 2015 State Fair. Good luck Sheppard and here is hoping we will see you then!