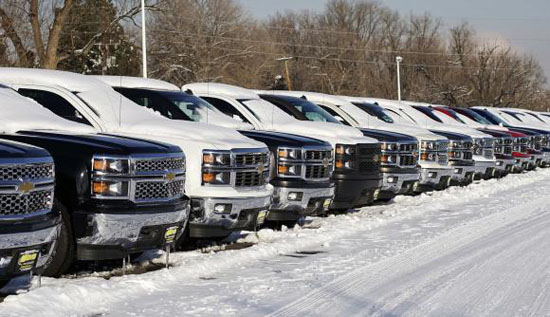 The Reuters story says that GM’s CFO Chuck Stevens spoke to Wall Street analysts to update them on the automaker’s financial outlook. During the meeting, the performance of the full-size trucks was discussed. Analysts say that the key message from Steven’s was that GM is planning on maintaining price “discipline.” They aren’t going to react rashly to losing some market share. Rather, they are going to hold the line and maintain their profit margins.

UBS Securities released a client note shortly after. It says GM is, “working on marketing strategies to gain traction at the lower end of the (pickup) market without giving up pricing gains at the high end.”

The message of maintaining their pricing discipline has been stated several times by GM executives during the new truck roll out. While some analysts don’t care for this strategy, such as one Barclays Capital analyst Brian Johnson who stated that, ”the launch has been arguably the least successful large pickup launch over the last 15 years,” it has been a consistent message.

A message of pricing discipline sure sounds great, but what about the recent news that GM has been raising incentives. In case you missed it, the news is that in February, GM increased their incentives. The early analysis from journalists is that increasing the incentives was in response to poor sales. GM counters that by saying the raising of incentives is all part of their roll out plan.

That may be the case, it is hard to argue one way or another. One thing is for sure, GM’s incentives are still lower than the competition. The “incentives on the Silverado 1500 were down to $3,764 per truck — lower than both Ford’s ($3,925) and Chrysler’s ($4,233). Incentives on the GMC Sierra — a premium truck that tends to sell at higher average prices — were even lower, at $3,521,” according to a Daily Finance story. (tried and failed to find Toyota Tundra incentive numbers)

The flip side to not having high incentives is more profit. GM said in a statement early in February that half of its light-duty pickup sales in the fourth quarter sold for $40,000 or more.  That is some serious profit and it helped GM post a $1.88 billion profit last quarter.

It is easy to look at the February numbers for the Chevy Silverado and see the truck as failure. For the month, sales were off 12.1% or 5,059 units. Yet, we have to remember that last year, GM was sitting on lots of 2013 inventory and they offered great incentives to move the surplus off the dealer lots. Sales numbers are hard to gauge how well a truck is doing and how the market is receiving it.

This pricing “discipline” stance sounds a lot like Toyota who recently announced that they were not adding production to their plant to meet demand. Toyota says they could build more trucks, but they would need to invest millions to expand production. While the boom of full-size trucks, before the recession, lead many companies to quickly expand production, Toyota says they learned their lesson and are holding steady.

What does all this mean for truck buyers? It looks like manufactures are happy with their profit margins and not so interested in market share or who’s number one. This doesn’t bode well for the average consumer who is looking for a cheap truck.

Yet, it could help out the new aluminum Ford F150. Why? That new truck will have to be sold at a higher price to maintain the same profit margin of the steel trucks since aluminum costs more to manufacture. With higher truck prices, Ford won’t have to be so aggressive on their pricing to look competitive.

It is interesting to note that the above numbers point to Chrysler offering the most incentives. This could be part of the reason why RAM sales have risen in the past few months. I say part because it is fair to say that RAM is building a much better product as of late.

Ultimately, it will be interesting to see how this plays out over the next few months. Right now, Toyota and GM say they are happy with their strategy, RAM is offering new products and incentives to move up in market share and Ford is working on rolling out their new aluminum truck. And throw Nissan in there somewhere. They are planning on bringing out a new Titan and have a Cummin’s diesel powered Nissan Frontier concept that looks pretty great.

One thing is for sure, the truck market could be the most competitive and interesting among all vehicle segments.

What do you think? Are we seeing the end of the cheap trucks?