1. Toyota has made some 00-01′ Tundra owners a buy-back offer, while others are only being offered repairs. The buy-back offers – based on reports from owners and conversations with dealers – seem to hover right around KBB’s Private Party Value for a vehicle in ‘fair’ condition and/or the average between NADA retail and wholesale.

Vehicle buy-backs are problematic when it comes to customer satisfaction. Some owners would rather have their vehicle fixed, while others expect more than Toyota is willing to offer. Toyota previously offered many 1994-2000 Toyota Tacoma owners 150% of retail to buy-back their rusting trucks, but they seem unwilling to make that same generous offer to Tundra owners…begging the question, Why Not?

It’s also difficult to understand why some owners are made a buy-back offer and some are not. While it’s clearly cheaper for Toyota to buy-back these old trucks than it is to pay for a full frame replacement, the lack of transparency is frustrating for both dealers and owners. Toyota’s latest announcement likely means that buy-backs are no longer available, but we really can’t be sure.

2. Toyota dealers are offering different degrees of assistance. Some Toyota dealers in Maine and Massachusetts have repaired dozens of trucks, while others claim to have “never heard” of this recall. Here’s why the dealers are so inconsistent: 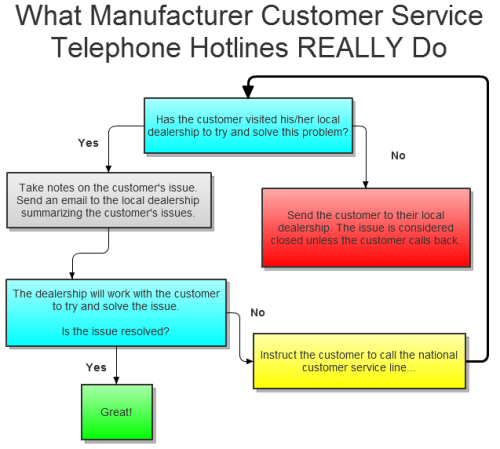 It’s a little bit of an oversimplification…but not much. The process really is circular. It might seem stupid, but this is by design. Some phone jockey can’t possibly figure out how to solve your problem – only your local dealer can. SO, if you want results, your local dealer better know how to work the system.

This, unfortunately, is the problem. While most dealership service managers are hard-working and knowledgeable, some are lazy and/or don’t understand how the system works. Dealerships can’t approve major customer service actions (like a frame replacement), but they DO have the cell phone numbers of the people that can make that decision. If your local dealership service manager is motivated, he or she can often get your problem resolved in a few days with nothing more than some phone calls.

The trouble is, some dealership service managers don’t have the ambition to solve your problem. Maybe they’re busy, maybe they’re lazy, or maybe you’ve done something to irritate them or their staff. Whatever the case, you would be wise to follow our recommended tips for getting your problem solved. If you’re persistent and pleasant, you’ll often get the best possible customer service.

In any case, we’re pleased to see Toyota expand this recall. Good luck to any first-gen Tundra owners that are working thru this issue.