Today, October 31st 2007, Toyota Motor Sales celebrates exactly 50 years in the U.S. Since 1957, Toyota has grown from a small importer of vehicles to what will most likely be the largest auto manufacturer in the world. In short, Toyota is a success story. Being that we’re all fans of trucks here, we thought it might be fun to briefly review the history of Toyota trucks in the U.S.

First up, the 1963 Toyota LandCruiser truck. Available in small numbers for only four years in the U.S. market (1963-67), these are highly sought-after collector’s items. 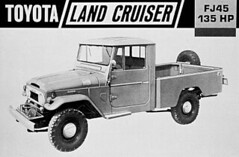 Next, we have the Toyota Stout. Available in 1964, this was the obvious predecessor to 1969’s Toyota HiLux. The HiLux was the first Toyota truck to reach measurable sales and commercial success. 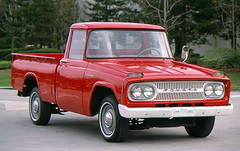 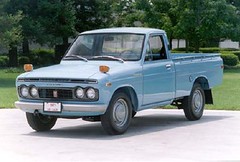 The “HiLux” name, as groovy as it is, was dropped from Toyota trucks in 1975. From that point forward, the small Toyota truck was simply known as the “Toyota Pickup”. The HiLux/Toyota Pickup developed rather quickly. In 1975, the SR5 package was first made available. In 1979, Toyota first began offering a four-wheel-drive model. In 1983, Toyota offered an “Xtra Cab” Toyota Pickup that was extremely popular. Toyota trucks began to come in their own in the 80’s, reaching top cultural status as evidenced by their various pop-culture references (who could forget the Toyota truck from Back To The Future?). 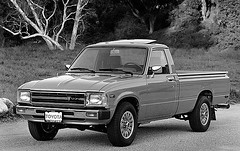 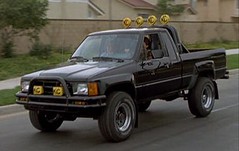 In 1993, Toyota introduced their first full-size truck, the T100. While many critics found the T100 supremely lacking, there are a lot of loyal Toyota fans who will argue this was one of the best Toyota trucks ever built. 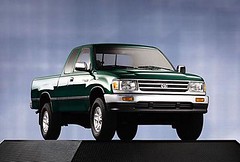 In 1995, the “Toyota Pickup” finally got a name of its own, the Tacoma. Known as the “Taco” by off-road enthusiasts everywhere, the Tacoma is easily Toyota’s largest commercial success in the US truck market. 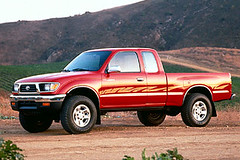 In 1999, Toyota released their next attempt at a full-size, the 2000 Tundra. This new full-size truck featured a powerful V8, as well as a larger frame, interior, and greater hauling and towing capabilities. When this model debuted, it was Motor Trend’s “Truck of The Year”. 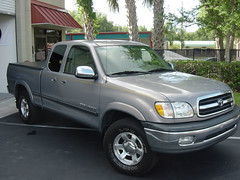 In 2004, Toyota released a completely redesigned Tacoma that rivaled the Tundra in terms of size and power, while still honoring Toyota’s compact pickup roots in terms of economy and off-road performance. 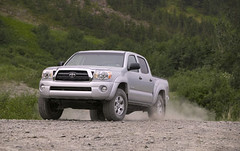 Finally, in 2007, Toyota released the 2nd generation Tundra. This truck silenced all the critics that said Toyota’s full-size trucks were really only 7/8th size, as well as offering the most powerful engine in the marketplace. 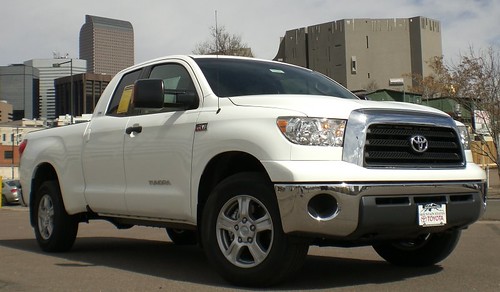 We all know how the rest of this story goes… 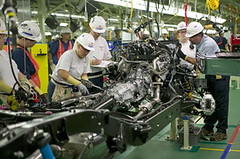 We recently found a nice description of the San Antonio Tundra plant, known as TMMTX in Toyota-speak, on Toyota’s Open Road blog. Here’s a summary:

The plant was built to create up to 150,000 new Tundras each year with its crew of 2,000 team members. It augments an existing plant in Indiana, in operation since 1999, which also assembles Tundras.

Texas was chosen because it

1. Nearly 79% of survey respondents have NOT filed a complaint with Toyota.

Amazingly, this problem seems to be under-reported by a factor of five. We’re not sure why people haven’t chosen to send an email or make a phone call, but we’re concerned that this lack of effort might ultimately lead to Toyota officially ignoring the issue.

3. Less than 10% of respondents described their bed bounce as “mild”.

91% of respondents stated that their bed bounce problem was “moderate” or “severe”, however, we think this is to be expected. Anyone with “mild” bed bounce might not know they even have the problem, so we’re not sure how valuable these statistics are.

4. 90% of respondents state they will modify or replace their Tundra if this problem isn’t solved.

If we assume that only people with severe problems decided to participate, this statistic makes sense. However, what doesn’t make sense (at least to us) is that while 90% of the owners will spend money to modify their suspension, replace their trucks early, or even sue Toyota, 80% of the respondents have yet to file a formal complaint…

Evidently, the anecdotes about highway bed bounce ring true — 85% of owners reported experiencing bed bounce on the highway only. Also, 69% of owners who participated reported that concrete highways were the only problem surface.

6. Basic data from the survey.

93% of respondents own the 5.7L V8.
61% of respondents drive double cabs, 36% drive the crew, and 3% drive the regular cab.
49% of respondents have owned their trucks 1 to 3 months, with the rest being evenly split between less than one month and more than 3 months.
53% of respondents rate their bed bounce as “severe”, 39% as “moderate”, and the rest as “mild”. There are no appreciable relationships between severity and truck type, nor between severity and frequency.
About 15% of survey responses were invalidated because of bogus VIN numbers or email addresses — it seems a few of our friends in the Ford, Chevy, and Dodge communities tried to participate in our survey.

Bottom Line: In our minds, our survey has been a bit of a failure. First of all, the number of responses has been very low (102 as of this posting). Also, it seems kind of foolish for TundraHeadquarters.com to lobby Toyota for action on this issue when only 20% of our survey respondents have bothered to officially report the problem. Furthermore, the data hardly seems to indicate that this issue is common. Our website receives more than 10k visitors per month, yet we have only accumulated 102 responses in 3 weeks. Granted, we don’t know for sure if all of our visitors are 2007 Tundra owners, but it seems that at least 5-10% of them would be (at a minimum). While we’ll keep our survey open through the end of October (if not longer based on response volume), at this point in time it seems the overwhelming majority of the community doesn’t find bed bounce to be too much of a problem.

To anyone who would say that they haven’t completed the survey because of privacy concerns, you’re welcome to complete the survey with a fake name. We’ve also upgraded the survey to a secure, encrypted connection. Finally, we only require a valid VIN# and a valid email address to validate a response. We’re not sure what other concerns people have, but we feel like we’ve done as much as we can to address them without ruining the validity of the survey. If you have any suggestions, or if you’d like to know more about our survey results, please contact us.

Again, if you or anyone you know hasn

Here’s what the letters and numbers in your Tundra’s VIN number represent:

The first three characters of your Tundra’s VIN number indicate where your truck was built.

The fourth character of your Tundra’s VIN indicates the body type.

The fifth character of your Tundra’s VIN indicates the engine.

The 6th, 7th, and 8th characters in the VIN indicate the trim level of the truck.

The 9th character in the VIN is used as a check digit.

The last six numbers of the VIN are used by Toyota to uniquely identify your vehicle, sort of like a serial number. However, these numbers do not appear to be sequential or numerically significant. Toyota seems to have a unique system for numbering cars – they don’t seem to be marking them 000001, 000002, 000003, etc.

With great regret and embarrassment, we’ve just determined that our last software update resulted in the “Contact Us” form functioning improperly. Any messages you’ve sent us via Contact Us form since September 8th were not received. If you’ve sent us a message and you haven’t gotten a response, please send it again.

Sorry we lost your messages — Jason the admin/I.T. guy/main writer/designated email responder will use more care when updating the site’s software.