How Long Before Toyota’s Drive Themselves with Robotics?

Toyota Motor Company has a history of innovation. They debuted a production hybrid car in 1997 (the Prius). They built one of the world’s most sophisticated assembly plants in Mikawa Bay, Japan, called Tahara, back in 1979. The Tahara plant is now estimated to be the world’s best quality auto production facility, with fewer defects per vehicle than any plant in the world. Of course, in 2007, Toyota debuted the new Tundra, the most powerful half-ton truck on the market today.

So, like I said, they’ve got a history of innovation.

We’ve already reported that Toyota is excited about the potential of their personal robot, and how they plan to develop a completely new industry. However, we’ve seen evidence that they intend to apply much of the technology developed with robotics integrated into new vehicles. Here’s a list of the new features you can expect:

1) Optical Recognition: What’s really stopping your car from driving itself? The on-board computer already controls every aspect of the drive train, and with the advent of ABS, traction control, and stability control, most vehicles can (and do) steer and accelerate themselves as needed. On board navigation systems, when combined with a local radio location signal, can pinpoint the position of your vehicle to within a few inches as it drives down the road.

If you car can stop, steer, accelerate, and know exactly where it is, why can’t it drive itself?

Because it’s completely and totally blind — at least for now. Optical recognition technologies are evolving. Originally pioneered by the defense department for guided missiles, computers with CCD sensors can now easily distinguish between shapes and colors. We’ve all heard of the face-recognizing cameras in Las Vegas, right? Continued investment in robotics will lead to better optical recognition technology, ultimately allowing a vehicle to “see” where it’s going using relatively inexpensive electronics.

2) Immediate Obstacle Awareness: Robots deployed in your home need to know what’s within the immediate area at all times. A variety of technologies can be used to achieve this, but a sophisticated radar-type system (significantly better than the sonic technology currently used in parking sensors) is needed to help keep a robot from running into a table leg, your foot, or your dog. This technology can (and will) be applied to vehicles. There’s a very good chance that “Collision Avoidance” will be an option that we’ll find on the window sticker in 10 years or less.

3) Robot-to-robot communication: If all our cars could see what’s in front of them and detect obstacles around them, it’s a short leap of the imagination to assume they’ll be able to communicate that information with each other. A high-speed wireless vehicle network could be used to share all this data amongst 100’s of vehicles, allowing them to function more efficiently. Theoretically, they could weave in between each other at high speed, negating stop signs, traffic signals, etc. All of our cars would move amongst each other like packets of bits do on the internet. Flying from point to point carefully navigated by a network of computers.

Imagine special ordering a new truck in 2022 — “I’ll take the Limited model with obstacle detection and avoidance, self-driving mode, and the Vehicle-to-Vehicle network package. I’d also like a sunroof.”

Alien Abductions, Get 4 More MPG, and the VW Thing

Some things I found loitering on TundraNetwork…

A Tundra owner that’s improved his gas mileage 4mpg by adding a pressurized air box — we’re excited to learn more about it.

This dog is wondering what’s going on and dares you to lie to him.

Mike’s VW Thing site is really fascinating — interesting photos, and one helluva story about breaking down in the Arizona desert in the middle of the night. Mike, if you want to embellish the story a little, you could absolutely change the “mysterious beetles” line to “Those aren’t beetles — THOSE ARE SCORPIONS!!”. Follow it up with the normal Hollywood horror ending, and you got yourself a blockbuster movie.

But seriously, good story. Check it out people.

If you haven’t checked out our TundraHeadquarters social network, TundraNetwork, you’re missing out. We’ve got a bunch of cool pictures uploaded in just the past couple of days, and there are people from all over the country signing up.

10) Where else can you put up unlimited pictures, videos, and have your own blog in less than half an hour?

9) When a fellow Tundra owner asks if you have a MySpace or Facebook page, you can smugly say “No – I’m on TundraNetwork”.

7) If you join soon, you can probably register under any name you want – like Tundra Man. That would be totally cool.

6) You never know who you might make friends with — can anyone say Fujio Cho, president of Toyota Motor Company?? (We made that up – no members named Fujio yet, but it’s still early.)

That’s a picture of Fujio over their in the center. He’s a handsome devil, that’s for sure…

5) Everyone else is doing it. Really.

4) Start on TundraNetwork, and you can work your way up to Match.com!

3) Where else are you going to see this pic!?

2) Did we already say that you’ll be just a little bit cooler??

1) If you join, we’ll stop talking about it on the blog. We promise.

Thanks to everyone that’s joined the community so far!

The Next New Toyota: A Personal Robot 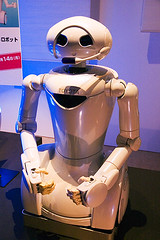 Check it out — Toyota’s latest model. It’s got a sleek paint job, the latest electronics, stability control, and a near-silent electric drive system. Oh yeah – it also has two arms and hands.

It’s a robot. From Toyota.

Toyota’s long term business plan includes heavy investment in the development of personal robots for use as nurses, housekeepers, receptionists, and possibly killing machines. Ok, not killing machines (at least they’re not admitting to that).

Toyota is one of the largest employers of “robot workers” in the world, with Toyota’s Japanese plants suspected to have 4,000 to 5,000 robots, about a 1,000 of which have two arms that were designed to replace human workers in some of the more repetitive tasks.

Toyota’s Tahara plant in Mikawa Bay, Japan, was one of the first highly automated car plants in the world. Tahara builds some of the higher end Lexus models, and they come off the line with some of the industry’s lowest defect rates — only 63 problems per 1,000 vehicles. According to the Detroit Free Press, that’s about a third less defects per 1000 vehicles than BMW or Mercedes.

Toyota’s commitment to building robots has been challenged buy some people that think the developments are disturbing. While it’s hard for me to imagine a Terminator-like future where Toyota’s robots run amock, evidently some people got Toyota’s attention. They put out a press release back in 2005 “stressing their commitment to human workers.”

Do you think that someday historians will look at that press release and wonder how no one saw the rise of the machines coming?? 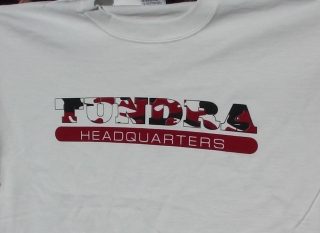 To celebrate the launch of TundraNetwork, our new social network, we’re offering a free TundraHeadquarters.com “camo” design t-shirt to the first 25 people that join TundraNetwork!

Unlike some of the forums out their, TundraNetwork allows you to upload pictures, videos, and music, and you can add your own widgets, link to your Myspace or Facebook pages, etc. Basically, it’s the “web 2.0” version of a forum. Just like TundraHeadquarters.com, TundraNetwork is FREE.

As incentive to join, we’re going to send out a free “camo” design TundraHeadquarters t-shirt to the first 25 people that join. The t-shirts are available in M, L, or XL, and they’re not available for purchase. The only way you can get one of these special t-shirts is if your vehicle is featured on the site, if you send us a good question or comment, or if you contribute to the site somehow. We’ve only got 100 of these things to give away and they’re going fast, so make sure you join TundraNetwork if you want to make sure you get one.

You can join by clicking the “Sign Up” link in the upper right hand corner of the TundraHeadquarters Social Network page. Our social network is powered by Ning, so if you already have a Ning profile, all you have to do is link your profile to our network. It doesn’t cost anything to join and you get a free t-shirt – what have you got to lose?

If you have any questions about joining the TundraHeadquarters Social Network, TundraNetwork, please contact us. We will be sending emails to the first 25 that join asking for your mailing address. Thanks for supporting us!