Any conversation on the 2015 Ram EcoDiesel has to start with the 3.0L diesel engine. The engine is an import from VM Motori out of Centro, Italy. This diesel has been in use throughout Europe for decades. We assume the U.S. version of the engine will be reliable since VM Motori has been producing engines for so long and with good results.

Also, an interesting side not is Fiat owns the engine maker. They bought 50 percent of the company’s stake in 2010 and completed buying the other half from GM in October, 2013. The story we have heard is that GM was going to use the 3.0L diesel engine in a next-gen Cadillac before the economy collapsed, they went bankrupt and then were forced to share their stake in the company.

Note: at the end of this story is a list of technical specifications on the engine.

When we opened the hood of the Ram 1500 EcoDiesel, it was at first surprising how small the engine really is. We had looked at this engine at various places over the past few years, but when it is sitting in your driveway and next to a 5.7L Toyota Tundra engine, it really grabs your attention.

With its small size, it is more tucked in than other engines, in our opinion. We wonder how many mechanics like to work on it since Ram trucks typically have a long front and, with the smaller engine, it is a bit hard to reach it. However, Ram engineers did help in this regard by making the belts easy to access from the bottom.

When comparing the two trucks, they basically measure up pretty even on the exterior looks. Also, usability is a bit mixed since the Ram offers their bedside boxes which certain truck owners will opt for a Ram because of it. However, judging both trucks straight up, with similar beds, it is all about taste. What makes a big difference then? Driving both trucks.

As most truck fans know, the 2015 Ram EcoDiesel is mated to a 8-speed transmission. This basically means you have a tiny engine with many gears. However, it is a diesel engine, so torque isn’t a problem and it is turbocharged. When driving the Ram, the EcoDiesel engine handles the weight flawlessly and shifting through the 8-speeds is smooth with just a slight feeling as it shifts. In fact, this shifting feeling can probably be chalked up to not being used to the 8-speeds.

On the flip side, the Toyota Tundra felt like it has a similar power output to the EcoDiesel and it produces more than enough power for the truck (the power  output is technically very different). This engine mated to a 6-speed transmission is quite a bit different than the Ram. The shifting is more pronounced and the engine sounds like it is having to work harder. This isn’t to say it is maxed out by any means, you can just hear it more.

Also, the Ram completely bests the Tundra on ride quality. The air suspension and rear coil springs simply provide a smoother ride even compared to a 2014 model (note: I have a 2013).

Is the ride so much better that it would deter someone from buying a Tundra? It shouldn’t, but it is better.

This was an especially thorny issue during our testing. We had several loads lined up only to discover we needed a weight distributing hitch. Plus, we learned our Ram EcoDiesel has a maximum towing capacity of 8,560 lbs. The Crewmax Toyota Tundra has a towing capacity of 9,800 lbs. Also, the Ram EcoDiesel has a payload limit of 1,340 and our Tundra has a payload limit of 1,575.

Ultimately, no one in nearly 100 miles of us carried a weight distributing hitch. Also, we talked with all sorts of people who had never heard of one. More on this later.

This meant we really couldn’t tow with the truck. While yes, we could have towed 5,000 lbs (the maximum without a hitch), we assume the Ram EcoDiesel will handle this weight just fine. We know the Tundra does.

In the end, we came to the conclusion that even though this is a diesel engine, it isn’t necessarily a towing machine.

This almost goes without mention, but the 22 MPG combined from the Ram 1500 4WD Crew Cab is well above the 15 MPG from the Toyota Tundra. Yet, what does this really look like?

Note: the Ram Ecodiesel can achieve 29 MPG in a HFE model. Also, the 2WD achieves 28 MPG.

Yes, the fuel economy is quite a bit different, yet when you break it down to just $370 a year, it isn’t THAT much of a difference in our opinion. 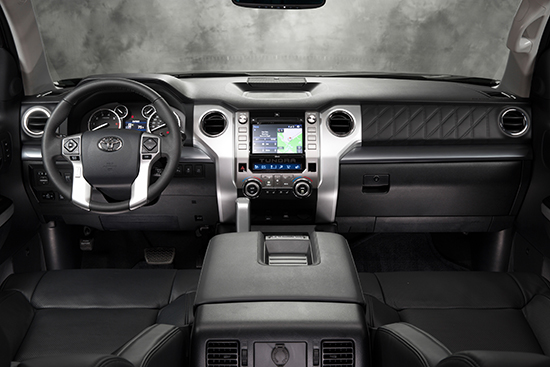 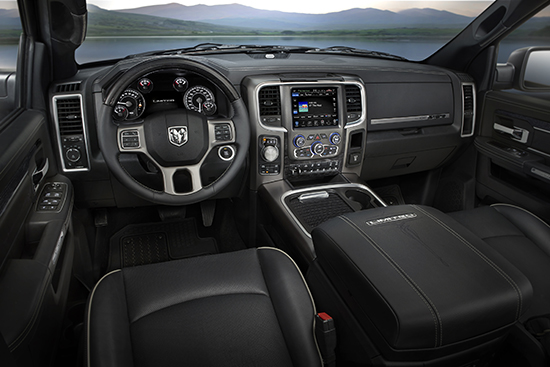 Here is a 2015 Ram 1500 Laramie Limited interior for comparison (note: we are terrible at taking interior photos like this!)

Another area where there are differences is in the interior. Officially, we had a 2015 Ram 1500 EcoDiesel Outdoorsman Crew cab with a sticker price of around $50k. It had a 3.92 rear end as well.

While my truck isn’t the same trim level as the Outdoorsman, I’ve been in plenty of time in Limited Toyota Tundra pickups which are closer. The difficulty here is Ram has 11 different trim levels and Toyota has 6 for the Tundra if you count the work truck. Doing an apples to apples comparison here is hard. There are three things that do stand out as differences between the two trucks:

1. Storage – the Ram has much more storage options than the Tundra. They did it right with the rear underseat storage option and the center console. With Toyota reducing the amount of storage options with the 2014 model, the difference is night and day. The Ram simply offers more and better storage. 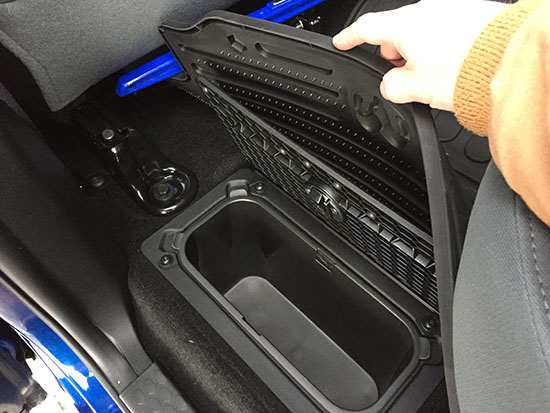 Hello Tundra Engineers. This is how you do under seat storage! 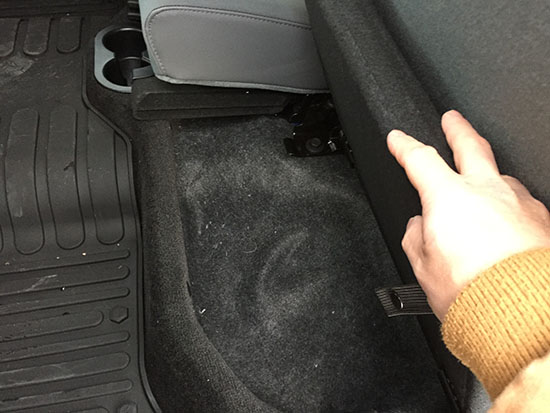 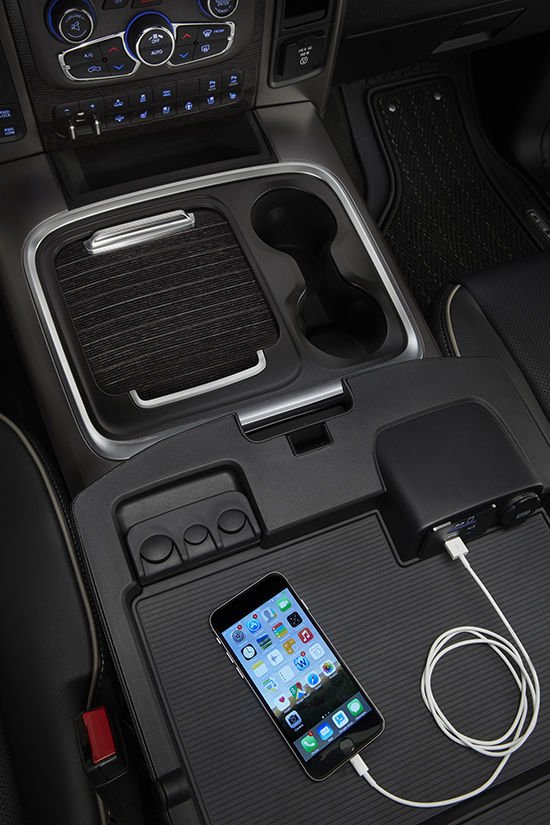 This is the center console. It has a split top. So, you can charge your cell phone or put things on the top shelf and then open it further to expose a larger space below.

2. Rotary Shifter – over the course of the last year, I have spent driven 4 different Ram 1500 trucks at various events and during this three-day loan. In each of these cases, they had the rotary shifter as opposed to the console shifter (plus, I have driven a slew of FCA cars and SUVs with the shifter). Ram reps have told me it takes about a week to get used and while I agree with their thoughts, I still don’t like it. Why? I recently drove a Ram 1500 in Montreal, Quebec, Canada and it hit me. It simply feels “less manly.” Again, this is a personal opinion and take it for what you will. Yet, there is something less fun about turning a dial to get your truck moving instead of grabbing the shifter and manually moving it into gear.

3. Uconnect System – Toyota fans can like it or not, but the Ram (and FCA) Uconnect system is simply the best on the market. Yes, the best on the OVERALL market. I’ve driven and tested out the Toyota Entune, Lexus Enform, Chevy MyLink and Ford’s My Ford Touch (they have now switched) and the Uconnect system simply bests them all. The easy of use, the bright icons and the many options are simply tough to beat.

This is a really tough question between these two trucks. On the one hand, the Ram 1500 bests the Toyota Tundra on most items like fuel economy, interior storage and driving. Also, like we said in the video, the price difference between comparable models is about $3k. Looking at a monthly payment difference of around $80 more for the Ram (depends on credit, interest, etc…) combined with the annual fuel savings and the price difference is within a few hundred dollars depending on driving habits. In our case, it works out to be $600 more for the Ram (monthly payments – fuel savings).

In the end, we know the price difference is really not much either way. Sure, a dollar is a dollar, but when you are talking about a $50k truck, a difference of a few hundred dollars seems minimal.

Based on all of this, which one should you buy? We really don’t know. Honestly, we don’t. We like the features of the Ram 1500, great ride and the better fuel economy, yet reliability continues to be a thorny issue for them. Also, the knobs are great and all, but we still like a truck. This is what you get with the Tundra. It is a truck with minimal things to break and less things that can go wrong. Yet, we like them both.

What do you think? What did we miss?

For the gear heads, here are some statistics from Diesel Power Magazine: