0 Flares 0 Flares ×
While the news cycle is still working through the IIHS and 2015 Ford F-150 crash test story, we came up with 5 key questions. Here they are: 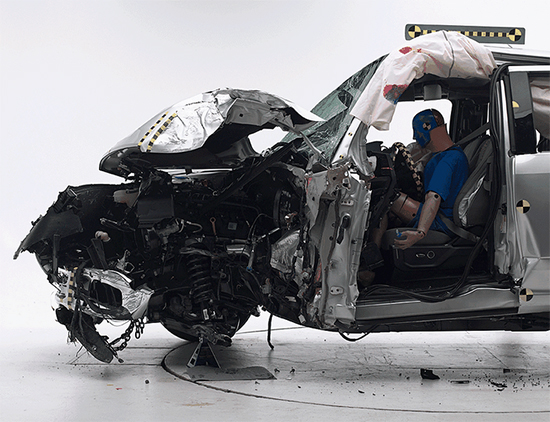 1. Why is the crew cab model so different from other cab configurations?

When people think of crew cab, extended and regular cab trucks, they often think of the length of the frame being the only real difference. We called Mike Levine, Ford Spokesman, to better understand then, why the wheel blockers weren’t used throughout their lineup. He told us it was because the body structure, the weight and how they were used makes a difference in what kind of safety measures you can use.
This means, the wheel blockers used in the Super Crew may not work on other models. Also, since they are still in the process of developing new countermeasures they don’t know as of yet if they will be backwards compatible in previous models.

2. Why weren’t all the trucks tested as one group?

Historically, when the IIHS tests vehicles, they do so in groups that make sense, according to Russ Rader, Senior Vice President, Communications for the IIHS. He told us they tested the 2015 Ford F-150 and released those findings individually because of the truck’s significance.
“We did something different because of it is so different, has the most sales and is the first time vehicle using aluminum has been mass produced,” Rader said.
The IIHS also plans on testing other 2015 models in the fall and is currently facing a backlog according to Rader. Currently, they just finished testing the 2015 Toyota Tundra. Results will likely be released all at once around the December timeframe.

Not really. While every news organization wants to talk about insurance costs being higher due to aluminum’s per pound price difference versus steel as well as having special repair facility needs, we haven’t seen it as of yet. Like we said in our previous article, we called three insurance companies and found rates were pretty similar.
However, like we said in that article, things can change. There simply isn’t enough data available to truly answer that question. Early indicators, like the Assured Performance Network’s findings, suggest aluminum repair may be cheaper than steel.

4. Is the small overlap test a big deal?

Yes and no. It is a big deal for the IIHS which claims 25 percent of all accidents are related to a vehicle’s front end hitting an object while driving 40 MPH or better. It is also a BIG deal to automakers who working feverishly to obtain those “good” ratings.
No, because there are other factors involved in crashes like this. If you are in an extended cab truck, depending on the situation, the worst that may happen is you break your leg.
Consider the IIHS’ findings:

Intruding structure seriously compromised the driver’s survival space, resulting in a poor structural rating. The toepan, parking brake and brake pedal were pushed back 10-13 inches toward the dummy, and the dashboard was jammed against its lower legs. Measures recorded on the dummy indicated there would be a moderate risk of injuries to the right thigh, lower left leg and left foot in a real-world crash of this severity.

The steering column was pushed back nearly 8 inches and came dangerously close to the dummy’s chest. The dummy’s head barely contacted the front airbag before sliding off to the left and hitting the instrument panel.

Overall, it sounds like a typical accident to us.

Again, yes and no. The fact is it is incredibly difficult to narrow down repair costs and get a true apples-to-apples comparison.  For example, since the construction of the new aluminum truck is dramatically different than the older steel model AND repair facilities are so new to repairing them, it is simply too soon to make this assumption. Plus, like other aluminum vehicles such as Tesla, Jaguar, Audi and Range Rover, initial costs to repair facilities are high right now. Over time, these costs will be minimized and labor repair costs should drop as repair facilities get acclimated to working on the material.
Finally, the truck is still too new. Like the Assured Performance Network found, it had nearly one-third of the test size sample for 2015 models as it found in 2014 models. This smaller sample size simply leads to disparities in data.
Ultimately, IIHS and Ford going to battle makes for good entertainment and really showcases how much those safety ratings mean for the companies. It also is good news for consumers who stand to benefit from the fall out.

Bonus question: Did Ford try to “game” the system?

This is the billion-dollar question right? We had one industry representative suggest to us the reason Ford didn’t use the wheel blockers throughout their lineup was due to weight and cost. Simply put, Ford was really trying hard to hit the 30 MPG target and any additional weight like the wheel blockers was a no-go. Also, cost. It sounds a bit silly, but adding $20-40 per vehicle in costs as well as additional time on the delivery line adds up. Are these theories plausible? Sure. I just think getting the “good” rating throughout their lineup overrules these theories.

What did happen then? Was the decision really made to move forward with development on extended and regular cabs without countermeasures for the IIHS front overlap test? Ford says it was. I’m not so sure either. Seems plausible, but with so much riding on the line for the truck, it just seems unlikely to me. It seems more likely to me, and using my knowledge of truck development, a department head was under a time crunch and needed to get things off their plate. So, they skipped adding countermeasures, because historically, the IIHS only tests one variant of truck and this would be the Super Crew due to its popularity. This seems most likely to me and for evidence of these things happening, I present the GM ignition switch debacle.

One thing is for sure. This story isn’t over.