The hubbub over an aluminum truck has exploded again and this time the Insurance Institute for Highway Safety is drawing attention for highlighting key safety equipment differences between Ford truck cab configurations and repair costs. Ford is fighting back with sales and repair costs data of its own. Buckle up readers, this story is just getting started. 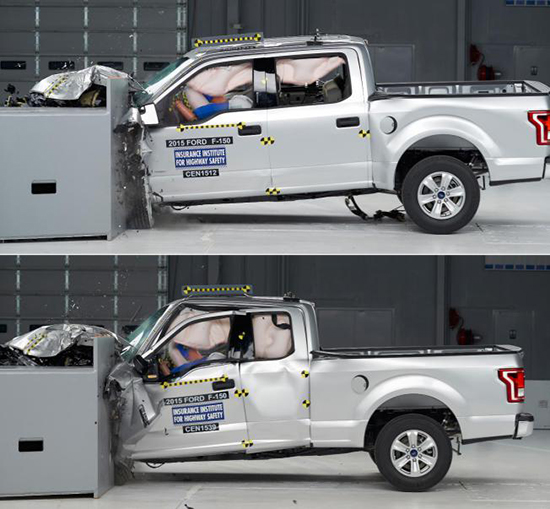 In a rare move, the IIHS is questioning Ford’s use of differing safety equipment on their trucks. They are also suggesting the new trucks will have higher insurance premiums and repair costs.

In case you missed all the news, specifically, the AutoNews stories, here is a quick recap. (seriously though, if you have time read the news stories). The IIHS has been looking into Ford truck crash ratings after it was discovered the Supercrew models come equipped with wheel blockers or “counter measures” to stop the front of the truck from being driven into the cab. IIHS says this happens in about 25 percent of the accidents per year and this test is known as the “front overlap test.” Since its introduction, it should be noted, many automakers have failed to achieve a “good” rating on this test, including Toyota. They released a 2014.5 Camry model where they specifically made changes to get that “good” rating.

What’s curious on this round of crash tests is IIHS looked at extended and regular cab models to determine their crash test rating. Typically, IIHS, like others, only tests one version of a particular model. This helps reduce costs for the non-profit.

“That shortchanges buyers who might pick the extended cab thinking it offers the same protection in this type of crash as the crew cab,” David Zuby, IIHS chief research office told the LA Times. “It doesn’t.”

Back to the story, IIHS gets wind of the extended and regular cab models having different equipment than the Supercrew and tests them. It finds the other cab configurations do have different test results and calls Ford out on it.

Basically, this boils down to, different cab configurations of 2015 Ford F-150 have different safety ratings, however, Ford, like other manufactures, touts the best rating – its segment leading 5 stars. 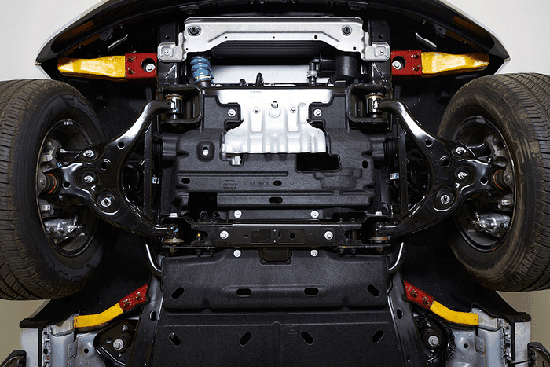 The items highlighted in yellow and red are the wheel blockers the Ford SuperCrew models use. They help it achieve a “good” rating on the front overlap crash test.

Ford responds by saying they are working on developing new “countermeasures” for their 2016 models.

“We addressed the IIHS small overlap front crash in the 2015 F-150 SuperCrew, which accounts for 83% of 2015 F-150 retail sales, and are adding countermeasures in the SuperCab and Regular Cab in the 2016 model year,” said Mike Levine, a Ford spokesman, to the LA Times.

Ford’s Levine told us that the test came out in 2012 and they were well into their new trucks redesign. They decided to focus on their more popular configuration to pass the front overlap test.

“The 2015 F-150 is the safest F-150 ever,” Levine said. “It is the only full-size, light-duty truck to earn NHTSA’s highest five-star rating for the driver and passenger for all crash test modes and cab configurations. In addition, the 2015 F-150 SuperCrew is the first large pickup in the industry to earn an IIHS Top Safety Pick in the current rating system.”

Confused? Stay with us.

Next, the IIHS decides to tackle the issue of repair costs. This has been a hotly (we mean HOTLY) contested issue since the 2015 Ford F-150’s release. There findings are simple.

“From a simple bolt-on parts replacement to a more-involved removal and installation of entire body panels, fixing the aluminum F-150 is more expensive than repairing a steel-body F-150,” David Zuby, chief research officer for IIHS, said in a report and written on AutoNews.com.

Pretty simple right? Except a recent report from Assured Performance Network and as reported on Pickuptrucks.com says that’s rubbish. It found the repair costs were almost $870 less on the ” 2015 aluminum-alloy F-150 is almost $870 less than the average cost of repairs for a steel-bodied 2014 F-150.”

Ford agrees with Pickuptrucks.com and released a statement today as well.

“Ford does not agree with the reparability costs and findings by IIHS and other stunts,” the company said. “Ford’s view is based on real-world accident repair data. In fact, real-world repair costs on the new 2015 Ford F-150 average $869 less than last year’s F-150 model, according to Assured Performance, an independent body shop certification company that works with leading automakers.”

This would be fine it this fight was just between the IIHS and Ford, but you also have Edmunds.com‘s story where they took a sledgehammer to an F-150.

“We looked at parts prices and how the repairs are done. While it always depends on what the damage is, in many cases the aluminum parts were not any more expensive than the steel parts for earlier F-150s,” Fisher told the LA News.

He went on to say it all depends on shop you take it to and whether it is one of the 750 dealers or the 800 independent shops Ford has certified.

The insurance premiums issue was once again raised after these stories broke. The IIHS, and frankly others like Edmunds and many automotive critics, have suggested the higher cost of aluminum will translate into higher insurance premiums for consumers. Ford has long fought against this notion by saying the premiums aren’t that different.

Now, Levine has been after me for quite a while to do my own research (rightfully so, I might add). So, today I grabbed the phone and did just that.

I called three of the larger automotive insurance companies to get quotes: Geico, Progressive and Allstate. My parameters for coverage were all the same and I priced similar 2014 and 2015 models. The results are below:

The differences on a monthly basis are really minimal and Levine is correct when saying the insurance premiums aren’t an issue.

Ultimately, one thing is certain. This isn’t the last time we will hear about this topic. With the longest-running truck sales crown up for grabs, things are going to get really heated. Stay tuned.