Is the Reduced Capability of The 2013 Avalon A Sign of Things To Come? 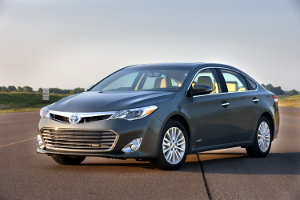 The 2013 Avalon features a 3% decrease in weight but a 5% decrease in tire width...and a subsequent loss of performance.

Toyota’s breathless press release about the new 2013 Avalon touts a number of weight-saving features, many of which will be applied across the Toyota line-up:

…lower vehicle weights are achieved utilizing revised lighter weight materials for vehicle construction. Rob McConnell, Principal Engineer, Body Shell and Exterior Plastics, said, “Through the installation of a higher class of high performance polypropylene resin (more fluid), we were able to decrease the general thickness of the front and rear bumpers, resulting in a decrease in mass, aiding in achieving improved fuel economy

Put another way, the 2013 Avalon uses thinner plastic bumpers than the outgoing 2012 Avalon. While it’s not necessarily bad to use thinner plastic, it’s not really good either. It’s a fair bet that this new thinner plastic is more expensive, not to mention that reducing the heft of the bumper covers doesn’t seem like a great way to improve crash worthiness.

Of course, it gets worse:

While Mr. Provost is technically correct when he says a lighter car can get away with using narrower tires, it’s not like the Avalon lost 500 or even 1,000 pounds of heft. The 2013 Avalon lost a grand total of 110 lbs, which represents a 3% reduction in weight. Hold on to that number for a minute.

What Does This Mean For the 2014 Tundra?

While I have no knowledge of a plan to use thin plastic and skinny tires on the 2014 Tundra, it stands to reason that some future version of the Tundra will get both of these “enhancements.” Thin plastic is annoying to think about, but it’s not automatically bad.

Narrower tires, on the other hand, are bad, at least as far as truck owners are concerned. Narrower tires lead to reduced traction in wet weather and off-road, increased braking distance, and poorer performance in emergency situations. If these new tires are also “low rolling resistance” models, it will be a double whammy.

Of course, there’s a fix for this problem – when you buy a new Tundra, you can go to the tire store on the way home and get yourself a set of good tires – but who wants to do that?

Here’s to hoping that Toyota – and all the other truck manufacturers – figure out how to meet these new fuel economy regulations without ruining the capability of their pickups. Otherwise, I fear the next generation of trucks will be less capable than the models on the road today.