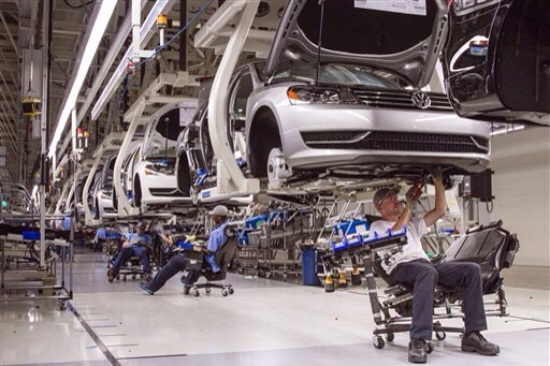 The voting results were released, on Friday, showed 712 workers opposed and 626 in favor, according to an Autonews.com story. VW says the votes represent 89 percent of the total workers who could vote. The results were released by a retired Tennessee Circuit Court Judge and will still need to be reviewed by the National Labor Relations Board.

“While we certainly would have liked a victory for workers here, we deeply respect the Volkswagen Global Group Works Council, Volkswagen management and IG Metall for doing their best to create a free and open atmosphere for workers to exercise their basic human right to form a union,” UAW President Bob King said in a statement.

All of this makes it sound like an open and shut story. Except, like most things, there is more to it.

In the months leading up to the vote, several billboards and TV spots appeared with messaging on the issue. Why all the attention? The reasoning is:

All of these reasons lead to some elected officials in Tennessee to come out publicly against the UAW in Tennessee. A number of these officials decried a UAW victory as a loss for the state since they felt a strong union presence would have businessess rethinking investments. Some state officials went further to pledge that if the UAW passed, they would vote to withhold future incentives for the company.

“We started to see some movement when the governor made his comments [indicating the union could hurt economic development],” Dennis Williams, secretary treasurer for the UAW, said after the vote. “Then Sen. (Bob) Corker who said he was not going to get involved came back [to Chattanooga] and had a press conference. We had a feeling that something was happening.”

This “outside” influence, it turns out, could allow the UAW to appeal the results on the grounds that the vote was tampered. The UAW claims that these outside groups “interfered with the basic legal right of workers to form a union.”

“What I hope the American public understands is that those people who attacked us were attacking labor-management cooperation. They don’t believe in workers and management working together. We believe in that. And we believe the workers here will ultimately prevail,” King said.

“It’s never happened in this country before that a U.S. senator, a governor, a leader of the House, a leader of the Legislature here, would threaten the company with no incentives, threaten workers with a loss of product. We think that’s outrageous,” King added. “We’ll look at all of our options in the next few days.”

Did the “outside” influence really impact the vote? The Autonews.com story says that:

“Some workers who voted no also cited the two-tier wage contracts at Detroit 3 factories and noted that some VW workers in Chattanooga make more than new U.S. hires at General Motors, Ford and Chrysler plants.”

Other workers singled out a clause in a UAW-VW neutrality agreement signed in January as part of the organizing drive. In the event of a union win, the clause called for “maintaining and where possible enhancing the cost advantages and other competitive advantages that [VW Chattanooga] enjoys relative to its competitors in the United States and North America.”

For some employees, that meant wages and benefits could be prevented from getting too high compared to other U.S. auto plants, including those operated by the unionized Detroit 3.

“The difference in the vote … was people hunting down the information to make an intelligence decision, not just listening to your buddy,” King said. “Of course, if you don’t win, you review your strategy.”

What’s next for the UAW? It is still fighting an uphill fight. Their membership has dwindled from 1.5 million in 1979 to about 400,000 today. This loss further hurts their chances to unionize many of the other “foreign” automaker plants that have sprouted up in the last several decades.

This loss also hurts King’s legacy as the head of the UAW. He vowed to work at building a more collaborative culture between the Union and automakers. King has conceded that the prior UAW tactics did contribute to the downfall in Detroit. His hope was to show a new side of the Union and re-build it. It was also a large test to see if the Union workers from GM, Ford and Chrysler could help influence another facility into accepting and supporting a union.

Ultimately, losing this vote is a BIG blow to the efforts of the UAW to rebuild its image and influence. While the UAW will continue to try to unionize factories like the Toyota Canada plants or the Nissan facility in Mississippi, this vote will sting and most likely hurt those efforts.

What do you think? Are the voting results what you expected? Does the UAW have grounds to appeal?