One of the best parts of my job is driving new vehicles and learning about them. While I have a pretty good understanding on all the vehicles on market, the Lexus LX 570 wasn’t one of them. It is shocking how off-road capable it is, how nice the interior is and how expensive it is. Yet, it is hard to not be thoroughly impressed by this luxury SUV. Here is my review. 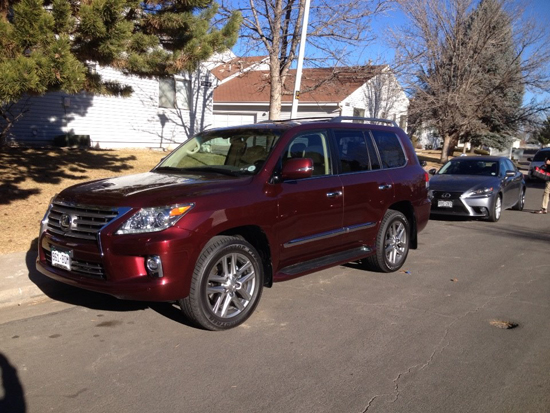 This is the 2014 Lexus LX 570 right after it was delivered. Please note: the weather turned awful the following day and this is the only photo  I took for this article, the other photos I “borrowed.”

Now, yes the price will immediately cause many people to walk away, I say not so fast. There is a reason it is close to $90k. The reason is that this SUV has EVERYTHING.

Many people on this site wish Toyota would offer this or that on the Tundra. While there is an argument from a price point as to why Toyota makes some of those decisions,  the Lexus LX 570 doesn’t have that problem. Lexus has seemingly thrown everything at this vehicle without regard to price point. The truth is that this SUV is more off-road capable than a Tundra,  rides better than a Tundra and has more features than a Tundra. Those are surprising statements when you consider how great a truck the Tundra is.

For those that are wondering, the Lexus LX 570 has a 5.7L V-8 with a 6-speed transmission (sound familiar?). It also has, I found this interesting,  a welded steel unibody shell combined with a full-size steel ladder frame (body on frame) construction.

Why do I keep saying it is really off-road capable? Check out this short list of mechanical features:

Going through the list, it has the TORSEN differential – similar to the one used on the Ford Raptor. Lexus says:

The full-time four-wheel drive system in the Lexus LX 570 employs a Torsen® limited-slip locking center differential that splits the power 40:60 under normal driving conditions. The rearward power bias contributes to on-road agility. The Torsen differential responds to changing conditions, adjusting the power distribution as necessary, with no input needed from the driver. The driver can, however, lock the center differential to handle especially challenging off-road trails.

This is one of the marketing images Lexus uses to sell this vehicle. Yes, in fact, I completely believe this vehicle is capable of doing this, but a $90k SUV doing it? I wouldn’t.

Besides the locking differential, there is the active height control. I actually had to read the manual on this one. It seems when driving at low speeds, you can actually raise the vehicle electronically for the road conditions – up to 2 inches.

The coil springs are an interesting addition and help provides for a smooth ride. It is pretty curious that the Lexus uses coil springs for a better ride while the Tundra doesn’t. I can’t recall how many times I have heard Mr. Sweers defend the ride quality of the Tundra. I wonder why they don’t just use the same coil springs Lexus and Ram does.

Let’s state the obvious; the Lexus LX 570 is large. In fact, it is the largest SUV that Lexus builds (and second priciest). While it could be dismissed as a big box on wheels (see: Lincoln Navigator), it is rather stylish for its size. I never felt it was so large that it was awkward to get around or park.

One of “little” features I liked about the LX was the lighting on the running boards. These lights have a set dimmer control where they stay on after you park your vehicle and turn off after a time period. Frankly, I noticed them one night when I parked it in my garage and had to retrieve something. Yes, I am probably going to sound like a whiny, non-truck guy (I’m not!), but it was really handy to have the lights stay lit without turning them on or starting up the car. I really wish my running boards on the Tundra did this. It would be nice to have a lighted step when getting out in the dark. I know, I know a dumb little feature that probably costs a ton of money to fix, but it was really convenient. 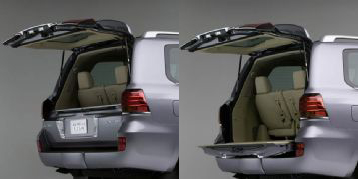 If you look closely, you will see the little half door. I’m sure it has its place, but I don’t like the narrow opening.

The feature I didn’t care for was the rear door hatch. The idea is that it is a “clam shell” design with the top hatch rising up like normal and then you have this little half door that folds down. I’m sure some people might find it handy, I found it awfully annoying. I mean, it felt like it was in the way when I wanted to remove items from the rear. Frankly, it just wasn’t for me and I’m not sure it serves any practical purpose. 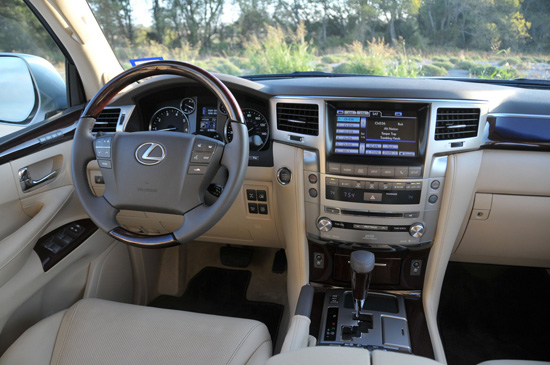 When you sit in the LX 570, it is tough to find anything not to like.

I’m going to make another blatantly obvious statement about the LX 570 – you feel like a KING sitting in it. Yes, a King. I have sat in Bentley’s, BMWs, Porsches, Audis, etc… and this Lexus is right there with them. From the moment I opened the doors, I could see the quality. Frankly, this interior is a notch above the best the Tundra offers (1794 included).

These DVD players were really great and they integrated quite well into the seats.

I normally don’t talk about the in-car infotainment systems because I rarely use them, but the look of this stereo reminded me of one of those square home entertainment systems. It makes a statement in the middle of the dash and blends in nicely. In the rear, the twin DVD players were awesome for both my boys. While, we normally have portable DVD players that we strap to the headrest, the built-in quality from these players really changed my opinion on getting them as a factory option. 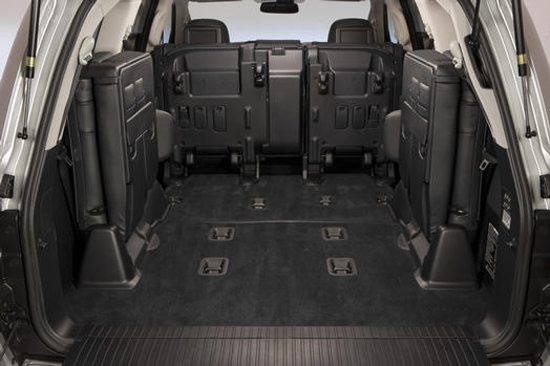 These rear seats stand up and I can’t imagine why that would be a good idea. Frankly, I had a hard time putting my golf clubs in this vehicle. This was pretty surprising.

The only thing I didn’t care for with the Lexus, was again in the rear. The third-row seats folded up and while the picture above makes it look there is plenty of space, I couldn’t fit many items lengthwise in the rear. I’ve been told they can lay flat, yet I didn’t do this and kept it set as delivered. Folded flat or folded up, it creates this awkward space to put your groceries or other items. In my opinion, they should have stowed away. The probable reason they can’t/don’t is that Lexus wants to keep the mechanical options and high clearance in the rear. While Lexus considers this SUV as a great off-road option, I’m not sure who wants to go off-roading in a $90k SUV, but that could just be me.

The truth is that this is  large SUV has much the same powertrain that is in the Tundra EXCEPT with the coil springs and the tuning, it rides more like a large sedan. Why in the world does this vehicle with such a similar makeup to the Tundra ride so much nicer is beyond me. I really do think that Sweers needs to take some notes. It is pretty easy to maneuver (if you are used to trucks not small cars) and is a pleasure to drive.

I would also add that this Lexus is considered a “truck” by their PR people. I guess I can see the reference, yet it doesn’t have a bed, so no go for me. Also, I will add that this is the same vehicle that Joe Bacal, friend of the site, drove to victory at several Baja races. Lastly, I did a calculation on what a monthly payment would be with a small down payment, low interest, etc.. (how I would buy a vehicle). Let’s just say it was more than my mortgage payment.

The reality is that I could go on and on about how great of a vehicle this is (rear hatch issues and all). Yet, it is a crazy vehicle in Lexus’ lineup. I mean, it is such a large vehicle with the body on frame construction that it just doesn’t seem to fit. However, it is a “global” vehicle for them and they sell around 4-5k annually.

Alright, you’re turn. Let us know how much you want this SUV!