The UAW is Poised For Growth – Are Toyota, Honda, and Nissan Ready?

For years, casual observers of the auto industry were quick to point to the UAW as a source of trouble for GM, Chrysler, and Ford. Tales of do-nothing jobs banks and $70/hour compensation were the source of a popular disdain for the UAW and unions in general, and the UAW found it very difficult to attract new members in this climate.

Today, things are quite a bit different. While it says here that the UAW wasn’t perfect, anyone with a real knowledge of the auto industry will acknowledge that the UAW deserves only a part of the blame for the meltdown of GM and Chrysler. The fact is, terrible management, poor quality, and poor designs were the primary sources of GM and Chrysler failure. 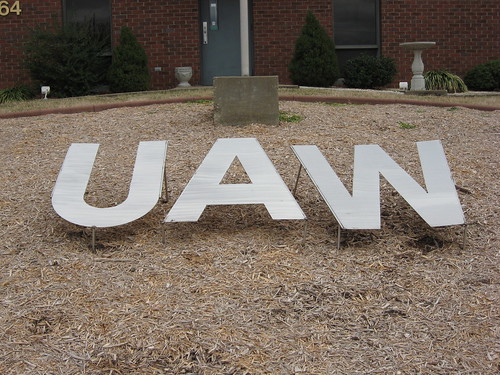 The UAW hall in Bowling Green, Kentucky (pictured) might be the most important union battleground of the 21st century.

The good news for the UAW is that all of this is behind them now. The UAW is now more likely than ever to recruit Toyota, Honda, and Nissan workers over the next 2 to 5 years. Here’s why:

It’s important to note that the UAW isn’t necessarily bad for automakers – especially if the UAW is the reasonable and realistic version that we’ve seen over the last 6 months. Unions provide benefits and protections to workers, and when managed carefully they can work with (and not against) their employers. Automakers often enjoy political benefits from unionization – the number of tax benefits and corporate loopholes that automakers enjoy in Michigan, for example, would never have been possible without strong political support from unionized workers and the UAW’s powerful lobby.

What do you think – with the UAW establish itself in a non-union factory in the next 5 years?