For decades, the typical product cycle of a truck was about seven years with powertrain components lasting a bit longer. Those days seem to be going by the wayside. As a full-size truck fan, this means no more waiting around for new technologies or improvements. 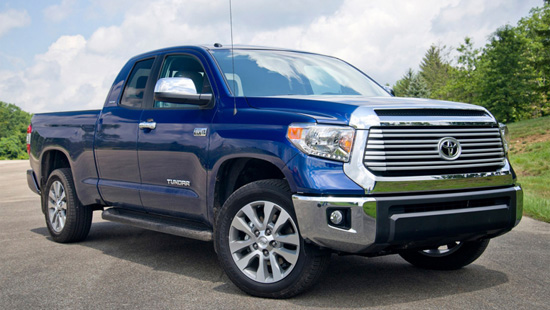 Changes are coming more rapidly to the full-size truck segment and this is a good thing for truck fans.

In the past few years, the full-size truck market has just exploded. Automakers are now depending on these profit machines to help their balance sheets and fund future vehicle development. This growth is also leading to a much more competitive market. Automakers are making changes more rapidly and this will benefit consumers.

As we told you last week, Toyota is working on a new 39-gallon gas tank for the Tundra (making it one of the largest in the class). We also are hearing from multiple sources that it will get an integrated trailer brake controller. No more aftermarket. And we also know, Toyota is working on tweaking the frame to improve the ride quality. That’s quite a few changes right after a new product launch.

Also changing things up is GM. Pickuptrucks.com is reporting GM will offer more gears in the transmission and maybe even start/stop technology as soon as next year.

There is also a new Nissan Titan coming next year and a new Honda Ridgeline which may debut later this year and you have a completely different segment.

We are also hearing the Toyota Tacoma and Nissan Frontier will be overhauled in the next few years. This is due to the introductions of the GMC Canyon and Chevy Colorado.

What does this all add up to? Every single truck on the market will either be new or recently refreshed by around 2015. Wow!

The facts are the full-size truck market is a cash cow. Even conservative Toyota is responding to market demands faster than they ever have before. We got a chance to speak with Toyota Division Group Vice President and General Manager Bill Fay at the reveal for the Toyota Camry.

He said product cycles are really going out the window. Competition is now driving demand in all segments including the compact car segment. At Toyota, the speed of changes are happening more rapidly. Fay said Toyota CEO Akio Toyoda “isn’t a bean counter.” Akio wants to infuse excitement into the brand and isn’t willing to wait around.

We take that to mean, Toyota will be refreshing or rethinking every vehicle in their segment. While capacity restraints will continue to hamper the Tundra, if it needs a larger tank or a brake controller to be competitive, it will get it. Toyota will be working hard to fill any perceived weaknesses of the Tundra in the next year and we feel certain the 2015 Chicago Auto Show will feature many changes to the Tundra and Tacoma.

Could we see changes announcements of the larger tank, integrated brake controller and ride quality improvements to the Tundra being announced? Seems likely. A diesel? Maybe so. We know they have been testing one. How about a brand-new Tacoma? We know they are working on it.

The company that used to play it safe has now awakened to a more competitive marketplace. This is good for all truck fans and the next 18 months will be full of exciting offerings.

What excites you the most? What is on your wish list?