The full-size 2012 Toyota Tundra Double Cab 4X4 is the better choice compared to the 2012 Dodge Ram 1500 Sport Quad Cab, according to a head-to-head comparison test that was conducted by Philly.com. A Philly.com reviewer recently took the two full-size pickup trucks for a spin, paying close attention to powertrain options, cabin and cargo space, the way the trucks drive and how easy the trucks are to maneuver. 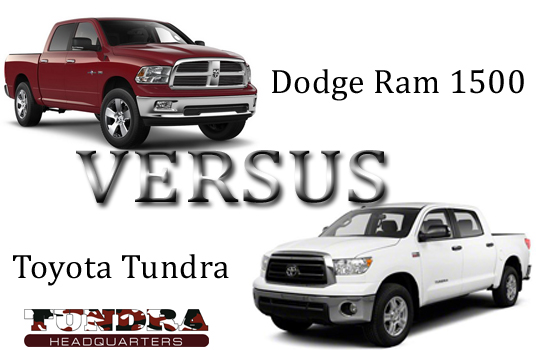 The Toyota Tundra came out on top in a head-to-head comparison with the Dodge Ram 1500 in a review by Philly.com

The Toyota Tundra pulls ahead of the Dodge Ram 1500 when it comes to hauling capabilities. The Texas-built Tundra has an available 8-foot bed for storing and hauling things in. The Dodge Ram 1500 is only offered with either a 5-and-a-half or 6-and-a-half foot truck beds.

The Tundra gets better fuel economy than the Ram. During city and highway road tests, the Philly.com reviewer recorded 18 mpg in the Tundra. The Ram returned 16.8 mpg during the test drive.

Although both pickup trucks are behemoths, the Tundra was easier to maneuver into parking spaces.

In the end, Toyota’s storied history of making dependable vehicles gets high marks. It’s handling is not one of its strong attributes, but buyers should keep in mind that it’s a tough, full-size pickup truck that serves it’s intended purpose.