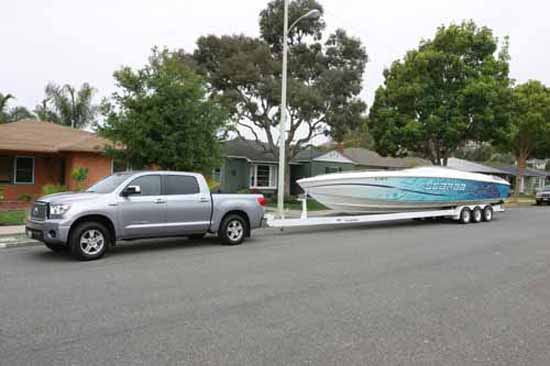 Yeah, it will tow your boat! How would you like to have more payload capacity? It could be coming.

The Toyota Tundra has long been regarded as a tough, durable and reliable 1/2-ton pickup. Rumor has it from sources in the truck industry that a new HD – still 1/2-ton – truck is in development. The belief is that Toyota sees a market for HD 1/2-ton truck. They maybe right with the new ginormous towing capacities of 3/4- and 1-ton pickups and subsequent high prices points. Consumers could be wanting something new. Yet, there are several challenges to such a pickup.

The first question is what would a 1/2-ton HD pickup consist of? What would the powertrain consist of? A diesel engine option? Maybe, but probably not. First, why would Toyota offer a HD pickup?

When it comes to towing, one of the big issues with the Tundra is payload capacity. Ask any RV owner towing with a Tundra and they will tell you. While, they may be close to the maximum towing capacity limit, the real issue is payload. Simply put, the truck can tow a lot, just not with a lot of weight in the bed/cab.

Imagine then if you were able to offer a customer a higher payload pickup with slightly increased towing capacity without the high ticket price of a 3/4- to 1-ton truck. This truck could be based on the current Tundra and just be another package offering. It would most likely keep up with the existing powertrain offerings and trim levels. Just imagine a 2014 Tundra with a more towing/payload capacity. This would significantly cut down on R&D development costs.

While, most Tundra fans would love to see Toyota’s market share improve in all segments, our guess is that this truck wouldn’t be setup for commercial/fleet buyers. Why? Autonews.com says that those buyers are 90% split between Ford and GM with the remaining 10% going to RAM trucks. This market is extremely competitive and we can’t imagine Toyota developing any truck to compete with that.

From a consumer focus, this rumor does make sense for Toyota in one big way. Every time you talk with their company reps, they say their goal is on being the 1/2-ton truck leader. Offering a niche 1/2-ton HD version would most likely help with that goal. And it could do away with that nagging issue Toyota has had for years: no HD version.

The MSRP for a 2013 Toyota Tundra 5.7L V-8 CrewMax starts at $34,930 and we would guess an HD version would run in the $45k+ range. Does it make sense then for Toyota to offer an HD version? Maybe, maybe not. One thing is for sure, it would give them a competitive option for some customers needing more payload capacity without needing to tow more than 10,000 lbs. Plus, it could quickly get them into the HD market. 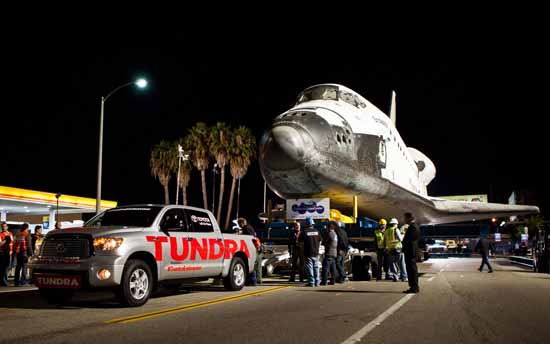 A tweak here, a tweak there and Toyota might be able to produce a consumer 1/2-ton HD pickup that matches the capacities of the 3/4-ton trucks on the market.

We have all seen how the Tundra towed the 282,000 lb space shuttle (maybe this is how Toyota got the idea). If you believe the truck is strong enough to tow that, it is easy to consider building a production version. The truth is that Toyota likely learned a LOT about their truck from testing it to truly see what it is capable of. It would make sense then that they could offer a HD version with upgrades to certain key components to allow it to tow heavier loads. Our thoughts for upgrades revolve around a reinforced frame, improved shocks, reinforced bed, different gearing ratios and enhanced braking capabilities. There is probably some thought into how to improve the engine or reprogram the ECM to improve towing or maybe not. Frankly, most RVers will tell you that the truck can easily tow more than what Toyota says it can on a regular basis. Again, it is really about a limit on payload.

Now, we still have a lot of questions like: Is the frame strong enough? Can the engine handle more of a load? What exactly will be reinforced/changed to handle the increased payload?

The reality though is that Toyota would be building a truck to answer a key consumer demand – an HD truck with increased towing and payload capacity. Could we see this response leading the way to other things like an E-locker? Who knows. It is exciting to think about the Tundra heading more in this direction and becoming more competitive in key segments of the truck market.

Your turn. What do you think Toyota would need to reinforce/change to make it happen? Is there a market for a 1/2-ton HD version?