Toyota will invest $150 million to increase V-6 production to 362,000 units. While many think Tacoma demand will take a lot of these engines, could we see a fuel-efficient package coming to the Tundra (ala Ram 1500)? Probably. 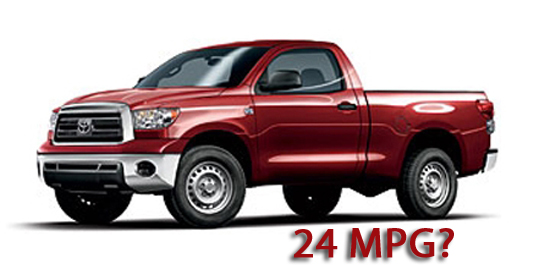 Full-size trucks are making huge gains in MPG. Is the Toyota Tundra next?

The sad truth for most full-size trucks owners it that MPG stinks and has for a long time. That is a big reason why the Ram 1500 made big news with their 25 MPG (highway) estimates. Talking with a Ram representative, they are very proud of this achievement without many of the “gadgets” used by Ford and GM like turbochargers or cylinder deactivation. Most of the improvements in MPG came from aerodynamic improvements and improved powertrain efficiency. Although, adding the active grille shutters and air ride suspension probably didn’t hurt either.

Toyota showed off a lot of aerodynamic improvements from the aerofins to the tailgate on the 2014 Tundra. This has led to a lot of speculation as to just how much those improvements will transfer into MPG estimates. With those numbers still not available it is anybody’s guess, yet our guess is 1-2 MPG.

Our guess is that, just a guess. Could we see a 2014 Tundra 4.0L V-6 4×2 regular cab reach 24 MPG on the highway? Consider, the current model reaches 20 MPG and that when Ram released their numbers, they jumped up 25% more than previous models. A 25% increase means the Tundra could reach the 24 MPG or higher mark.

Historically, automakers have built these fuel efficient pickup packages only to see them be BIG sales duds. But, with the gasoline prices increasingly hitting $4/gallon, could these packages be a hit? That is a big question that will be answered this fall.

What do you think? Does it matter to you at all for Toyota to offer a fuel efficient Tundra package?