As a general rule, I don’t like to presume that a plastic part is automatically inferior to a similar part made from metal. There are plenty of examples of plastic and/or composite parts (from intake manifolds to frame cross-members) being used effectively. However, Ford might have screwed up when they replaced the F-150’s steel fuel tank shield (aka fuel tank skid plate) with plastic.

This past week, a Florida jury awarded $4 million to a plaintiff who sued Ford for basically going cheap on the fuel tank shield (aka skid plate). From Yahoo News:

The lengthy three week trial…argued that Ford’s decision to replace a metal safety skid plate with a plastic version, compromised the integrity of the fuel safety system, making it vulnerable to punctures and cuts from road debris and hazards.

On July 18, 2008, Michelle Brannen was the passenger in a Ford F-150 traveling on SW 5th Avenue in Union County, Fla. The driver lost control of the vehicle, causing the truck to leave the roadway and run over a stop sign post. As the F-150 ran over the post, [the skid plate] fractured in two and punctured the unprotected fuel tank, leading to a fuel fed fire. Michelle Brannen managed to survive, but suffered catastrophic burns.

To my knowledge, Ford is not the only company to use plastic/composite skid plates. Heavy-duty plastic is impact resistant, light weight, slides more easily over obstacles, and is relatively inexpensive to replace. While it’s not as sturdy as steel, it’s not like it can fail easily. It would take quite a bit of force to snap it in two. 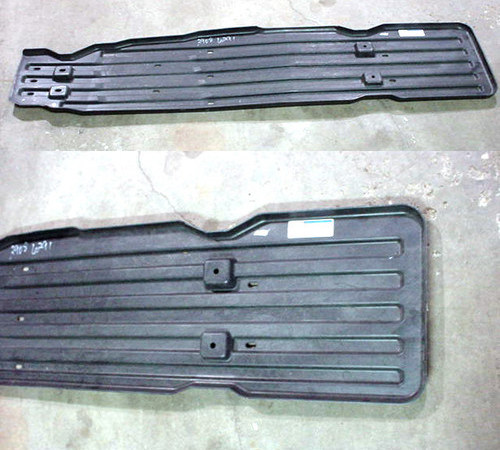 The fuel tank skid plate used on newer F-150s, which seems to be made from heavy-duty plastic.

What’s more, no part can be designed for every possible contingency. There’s no guarantee that this particular story would have a different ending if steel had been used instead of plastic.

Still, Ford replaced a steel part with a plastic one…and they did so on a product that claims to be “Built Ford Tough.” It’s no surprise that the jury had sympathy for Ms. Brannen – who would expect that the F-150 would rely on plastic parts for such a critical purpose? A quick perusal of F-150 owner forums shows that these skid plates are regarded as “flimsy” and “super weak” by owners.

While I don’t think it’s wise to say Ford made a design mistake here (I’m pretty certain that Toyota uses plastic skid plates, and they don’t usually make bad design choices), I will say that all automakers should take another look at fuel tank protection. From this lawsuit to NHTSA’s requested (and rebuffed) Jeep fuel tank recall, it’s clear that consumers think automakers aren’t doing enough. I’m not sure I disagree.