Truck Paint Color Not to Choose

Sometimes it seems we like to really know too much about our cars. In fact, we spend millions of dollars on research to answer our questions. Vital questions like what paint color attracts the most bird poop? 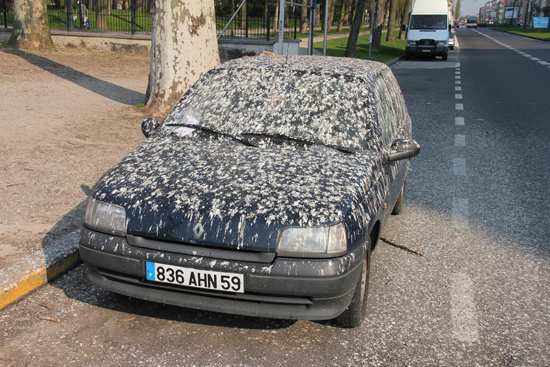 Hmm... Might want to get that cleaned up before you drive it.

According to a recent study conducted by online retailer Halfords has found that the magical color to avoid is red. Apparently they sampled 1,140 cars in Brighton, Glasglow, Leeds, Manchester and Bristol to determine that red cars get hit 18 percent of the time as reported by Autoblog.com. Closely following that is blue which got hit 14 percent. The best color? That would be green that got hit one percent.

Finding out which paint color got hit the most wasn’t apparently enough. The researchers also wanted to know how quickly those owners washed the poop off the car. They found that only one in six owners washed off the poop immediately. The majority waited until the next car wash. Halfords correctly points out that leaving the “strong alkali substance” (poop) on the paint can cause damage to the color. They estimate leaving it on leads to $89.3 million per year in damages.

Researchers who compiled the results found 18 per cent of red cars were marked with droppings, blue 14 per cent, black 11 per cent, white 7 per cent, grey/silver 3 per cent, and green 1 per cent.

Leading car polish experts Autoglym said the damage to vehicle paintwork arose not from the acid or alkali in bird faeces, but from paint lacquer softening and expanding to form an uneven mould around the dropping which produced a dull patch. Grainier textures from seed eating birds produced the most blemishes, so pigeons are worse for motorists than seagulls.

It is pretty amazing to think that bird poop could cause nearly $90 million dollars in damages. And I wonder how in the heck they came up with that number.

The press release also has a handy bit of advice removing “bird deposits.”

1. Remove at the earliest opportunity

2. A moist cloth should be used – Autoglym Bird Dropping Wipes are ideal – to gently lift the deposit from the vehicle surface.

3. If the deposit is dry or doesn’t lift easily, place a moist cloth over it for ten minutes to soften the deposit

4. Dispose of any cloth or wipe used to remove bird droppings immediately and carefully wash your hands, as bird lime can harbour diseases

When is the last time you immediately pulled over and removed “bird deposits”?