Honda announced this week that they really are going to build an all-new Ridgeline. Really! 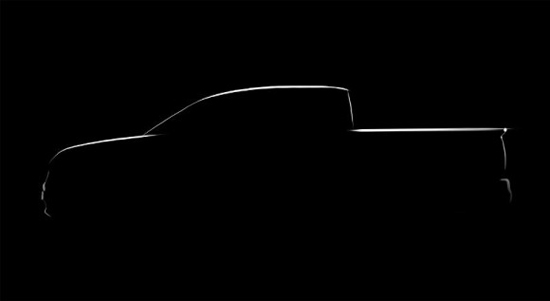 This silhouette is all we have on the new Honda Ridgeline.

Details are pretty scarce on this news and Honda has only revealed a photo and a plan to debut the model in two years. They are also going to stop producing the current model in mid-2014. This leads us to believe that there could be some time when Honda will not have a truck to offer.

While Honda’s foray into trucks has been a bit of a hit or miss (depends on who you ask), we would characterize it as a miss. For the 2013 model year, it has sold 16,160 vehicles and while that is a 29 percent increase for Honda, it is about the monthly sales of nearly everyone’s pickup lineup and then some. However, for Honda, it is might be just what they were hoping to achieve. Who knows.

The Honda Ridgeline has been a bit of a mystery ever since its introduction. Is it a fullsize, midsize or a crossover type vehicle? It has the size of a fullsize, but it surely doesn’t have the characteristics of one.

Honda could decide to really get serious about the fullsize truck and the first-gen Ridgeline could follow the same timeline of Toyota truck heritage (T-100 to 2nd gen).

Until new details come out, it is all really just speculation at this time.

What do you think Honda needs to do to be more competitive?