General Motors announced pricing this week for its 4G LTE plans through a partnership with AT&T. These plans will allow you to have Wi-Fi and join OnStar as yet another lucrative profit generator for the company. Call us skeptics, but you have to give GM credit for finding new ways to increase profits. 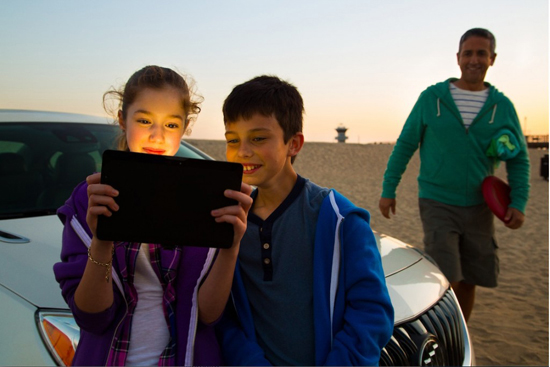 GM is launching a 4G LTE data plan, providing wi-fi to its vehicles.  Wonderful. Take your kids to the beach and they can watch a movie instead. Great idea.

The new 4G LTE plan will bring Wi-Fi capability to numerous GM vehicles. Working through the OnStar device, cellular 4G LTE signals will be broadcast throughout the vehicle as Wi-Fi networks. Thanks to the roll out of OnStar years ago, the devices to make this work are standard equipment in many GM vehicles.

As one would imagine, OnStar subscribers will receive a discount. For them, they can access 200 MB of data for just $5 a month. GM says this is “enough to stream more than 6.5 hours of music, surf the internet for 13 hours or send more than 10,000 emails without attachments.” There are also plans to offer 1 GB, 3 GB and 5GB for $15, $30 and $50 a month, respectively.

We have to give GM credit though. They found a way to expand the usability of their OnStar hardware. GM executives have been looking to expand the OnStar profit machine for several years now. This 4G LTE plan is the latest effort to take it from the security oriented, monthly subscription service into a robust multi-dimensional offering.

Last year, then GM CEO Dan Akerson told Automotive News that the 4G offering “opened up what I think are potentially lucrative lines of business that don’t exist.”

GM is planning on looking at expanding App offerings, connect vehicle maintenance data with dealer service departments, change/eliminate Cadillac’s CUE and Chevrolet’s MyLink systems into one and consolidate billing. It is hard to not see this as a good plan – albeit once privacy concerns have been addressed.

Why expand? Analysts say OnStar pulls in $1.5 Billion in revenue annually with a profit margin of 30 to 35 percent. That fat profit margin is five times more than GM’s 6.2 percent, reported in their first-quarter adjusted earnings report before interest and taxes. That is a LOT of profit.

This is great and all, but really? If you are in that much need for Wi-Fi in your car, why wouldn’t you just setup a mobile hot spot offered through pretty much every cell phone carrier? You can easily add this to your plan and pay the one bill. Plus, as technology changes and improves, your cellular company will be on the leading edge in making these changes.

The reality is that we get it. There are going to be lots of people who are going to like/use this service much like they use OnStar. We just think there are better offerings in the marketplace than using GM’s service.

Lastly, what about the ongoing problem of distracted driving? This seems to just enhance the possibility of it happening.

There are great technology innovations that makes sense. How about a wireless charging system? Toyota has one in their brand-new 2015 Toyota Camry. This pad, located under the center console tray, will charge your cell phone (as long as its capable). No strings attached, just place your cell phone on the center console tray and it will start charging.

This wireless charging system has been around for a little while and we can’t wait to see it in the Tundra.

The facts are automakers have ALWAYS been behind the technological curve thanks to their ridiculously long product cycle time frames. As we wrote about Monday, speeding up this process could help automakers to stay on top of technology better. Although, we still prefer automakers stick to build cars and cellular companies sticking to providing wireless data service.