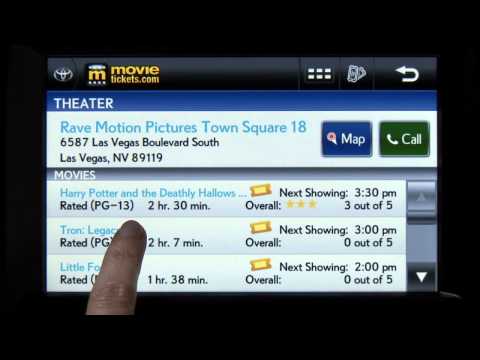 Each of the Entune’s main features are contained in separate applications, very similar to the apps people download onto their iPhones or Android devices.

Toyota has been very smart to use off-the-shelf technologies to power Entune. The basic software behind Entune comes from QNX Software, which is a subsidiary of RIM (the same people that make the Blackberry). QNX software currently powers more than 20 million vehicle systems around the world, which probably means that Entune will be stable and relatively bug free.

Toyota seems to have chosen their partners for Entune very wisely.

Here’s a quick breakdown of features offered by Entune and how they compare to Ford’s Sync system and GM’s Onstar:

Note: This table will be updated as more feature information becomes available

*Sync is understood to include Ford’s new MyFordTouch features.

Questions We Have About Entune

The data plan question is interesting because streaming one hour of Internet radio each day will consume about 860 megabytes of data each month according to the AT&T data plan calculator. That means that many iPhone customers will have to upgrade their data plan if they want to utilize this feature. If Entune eats up a lot of bandwidth completing local searches, navigation, etc., some iPhone users might not be happy campers.

Bottom line: The fact that Entune can be upgraded over time guarantees that this will be a worthwhile feature for Toyota owners who already use a smart phone. Even if the current iteration of Entune sucks (and it doesn’t seem like it does), an upgrade will always be available. Kudos to Toyota for taking Ford’s idea and making it better.