The trouble with adding new parts is that we’re really not sure how this problem is occurring. We know that the cause is water corroding the valves and/or damaging the air pumps, but how does the water get into the system in the first place? The air injection pump pulls air from the same location as the factory air box…if water is getting in that way, it would be a surprise.

The better explanation (suggested by a smart TundraHQ reader who’s name I can’t find right now) is that humid air is causing condensation inside the air injection system, and that the condensation is collecting in the pump. Over time, enough water can collect to short out the system. If this is truly the cause, adding new parts isn’t a long term solution. While it may be that Toyota has already figured this problem out and – as usual – decided not to tell anyone, we haven’t heard that info.

Some people reading this might be wondering why Tundra owners don’t just ignore the check engine light for this particular problem. The answer is that, because this is federally mandated emissions equipment, it sets a hard fault in the ECU if there’s a problem…and a hard fault makes the truck practically un-driveable.

So, ignoring the problem is impossible and buying new parts might not be a solution. What if someone came up with an electronic bypass instead? The only downside – aside from breaking the law, of course – is that the truck might spit out a little bit more pollution on startup.

First, a little background on the air injection system and it’s function:

Air injection is used to improve cold-start emissions, a federally-mandated emissions requirement. By injecting fresh air into the exhaust stream, the catalytic converters will heat up more quickly and therefore become more effective at scrubbing exhuast gases. Once the catalytics are warmed up, the air injection system is no longer needed.

As you can see, there’s no legitimate purpose for the air injection system beyond reducing cold start emissions. It serves no other function.

If you’re an EPA employee and you’re reading this, please understand that what I’m about to suggest is merely for discussion purposes. I would never advocate purposefully deactivating federally required emissions equipment…cause’ that would be illegal. However, if someone *wanted* to break the law, they could use a readily-available piece of after market equipment to do so. 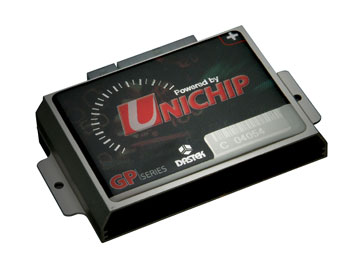 If you have a Unichip custom tuner package, you could modify a Unichip module (above) to block the air injection system’s electronic signals…hypothetically speaking

Unichip offers a “tuner kit” that can be used program a Unichip module to modify any sensor input…including the sensor that tells your truck if the air injection system is working properly or not. If someone had a computer, a Unichip module, and a mind to buy a tuner kit, they would have all the tools needed to find and modify that sensor signal using the Unichip.

I have no knowledge of this ever being tried, and I would never suggest doing it, but I do know that Unichip’s system is capable of fooling this sensor input. It’s quote “well within the Unichip’s capabilities” to fool the engine into thinking the air injection system is working when it may actually be broken…hypothetically speaking, of course.