DynoMax 39471 Exhaust System for the Toyota Tundra – A Review

Adding a performance exhaust to your Toyota Tundra is a simple way to not only grab a bit more horsepower but also improve the sound of your vehicle – especially if you own a V8 model. The lure of the eight-cylinder rumble is a powerful one, which means that there are many different cat-back exhaust systems available from the aftermarket. We decided to install a DynoMax system on our Tundra project truck so that we could evaluate both the benefits and the downsides of opening up your pipes.

Our DynoMax 39471 system, which is designed to fit the 2007 – 2009 Toyota Tundra with the 5.7-liter V8 did not pose any particular problems when it came time to unbolt the factory exhaust and replace it. The box that DynoMax sent to use contained a single dual inlet / outlet muffler, all of the required hangers needed to secure the 2.5-inch piping to our pickup’s chassis, as well as polished rear tips.

The entire kit is bolt-on, so if you have access to a lift you can most likely install the DynoMax 39471 yourself. It’s not recommended to attempt this kind of project if you are working with ramps or jack stands, however, as the weight of the piping combined with the lack of space to work in can make the task a tedious and unpleasant one.

According to the dyno, the DynoMax exhaust system managed to uncork an additional 11 horsepower from our otherwise stock Tundra engine, giving us 312 ponies in total at the rear wheels. We also saw an increase of 9 lb-ft of torque for a total of 314 lb-ft. Throttle response felt much better after installation, and the engine seemed more willing during highway passing than it did when breathing out through the factory pipes. Not bad for an exhaust system that retails for less than $500. 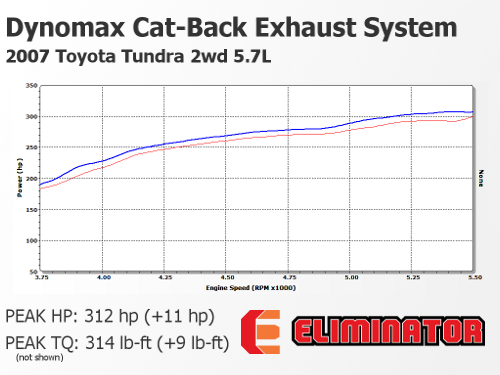 We were also quite impressed with the sound of the DynoMax system. Although not overpowering, it’s impossible to ignore the fact that our Tundra was louder post-installation. We noticed that on idle, the Ultra Flo muffler that came with the kit was fairly quiet but putting the gas pedal down quickly reminded us that we were no longer living in a world of stock sound deadening. This is not a stealthy system – it’s one that is going to remind you it’s there every time you get on the throttle. That being said, we never felt overwhelmed by the increased exhaust noise coming from the DynoMax system. In fact, the tone was quite pleasant and put a smile on the face of anyone who drove the project Tundra.

Drone is always a question mark when installing an aftermarket exhaust, and although we could hear some resonance when cruising at 2,200 RPM, we’re very hesitant to label that particular type of noise “drone.” What we can say for certain is that when cruising steadily below 2,100 RPM the truck was almost as quiet as it was at idle, and the sound that leaked through to the passenger compartment was more than acceptable all the way up to 85-mph, when we backed off of the throttle.

The DynoMax 39471 exhaust system for the Toyota Tundra is a definite win for our project truck. We love the sound, we can feel the extra power that it’s unleashed from the truck’s engine, and the entire installation process was simple and trouble-free. We also like the fact that the DynoMax system’s dual tips exit to the side instead of poking out from under the rear bumper, as that makes it less likely that we’ll damage them while loading cargo – or burn our legs when standing too close to the tailgate. With its affordable pricing, we can easily recommend the DynoMax 39471 for Tundra owners looking for a performance exhaust system that offers solid power returns for the dollar.