UPDATE: another “flashback” post in anticipation of the 2013 SEMA event.

Quite often the SEMA show is full of wild (and weird) custom “themed” vehicles. Keeping with tradition, the “DraqQuoia” – Toyota Sequoia Dragster – will turn some heads! 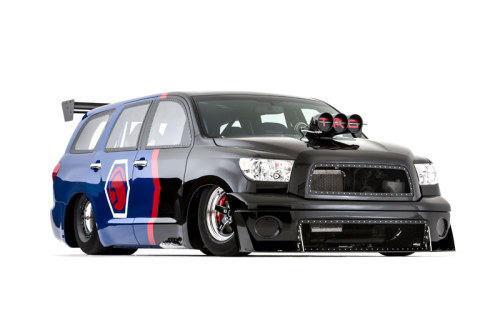 The DraqQuoia, a Toyota Sequoia Dragster, is either a really cool concept or an overdone grocery go-getter.

The DraqQuoia is the brainchild of NHRA driver Antron Brown who wanted to share some of his adrenaline from racing with his family. With the help of Motorsports Technical Center, a 650-horsepower, supercharger Toyota Sequoia “Family Dragster” was born. The vehicle was quickly dubbed the DragQuoia by Brown and will appear at the 2012 SEMA show as part of Toyota’s Racing Dream Build Challenge. It includes:

The exterior features Aerodine carbon fiber rear wing and front wing. It also comes with custom paint and graphics. PLUS, it has an impact parachute.

The interior has six-point safety harnesses that include the toddler seat along with a full roll cage. It also has Aerodine carbon fiber custom door panels and a JBL sound and video system.

About Antron Brown
Brown is the only driver in NHRA history to win in both Top Fuel and Pro Stock Motorcycle making him one of the top drivers in the sport. He began racing motocross at the age of 12 and made his first competitive drag racing run as a high school senior.

About the Competition
The Toyota Racing Dream Build Challenge pits four world-class drivers against each other to develop a custom Toyota vehicle. Voting for the competition is done on Facebook and runs through October 29 . The winner will be revealed at the Specialty Equipment Market Association (SEMA) Show in Las Vegas on October 30 and will be televised live on the internet. Toyota will present the winner with a $50,000 check for their charity of choice.

Brown chose the Racers for Christ as his non-profit of choice. According to ToyotaRacingDreamBuild.com; “Racers for Christ provides chaplains for motorsporting events across North America. They serve at over 2000 automotive contests each year from drag racing, road racing, to circle track racing, servicing the emotional and spiritual needs of the world of motorsports. Their ministry hinges on the phrase, “Cars are our Passion, People are our Purpose.”

Is this DragQuoia the next generation of the family station wagon? Would you get groceries in it?