Emissions regulations are particularly harsh when applied to diesel engines. By nature of their fuel and their combustion cycle, diesels generate two types of emissions that gas motors don’t really generate (at least not in the same quantities):

Soot and NOx aren’t any picnic either. Not only are they unpleasant, they have long-term health effects and can even cause lung cancer. Yet for some reason, US emissions rules allow for much more carbon monoxide than NOx or particulates.

The point? There’s no denying that emissions are bad. The question is, why are diesel engine emissions so much worse in the eyes of US regulators? Carbon monoxide can kill people, but it isn’t as heavily regulated as soot and NOx. Go figure.

The most recent emissions regulations from CARB have forced diesel vehicle manufacturers to install a complicated system that either a) traps NOx and soot or b) treats the exhaust gases with a chemical known as urea before they’re expelled into the atmosphere, essentially eliminating NOx and soot from the exhaust stream. Additionally, most diesels also use some sort of EGR system to reduce NOx emissions, further reducing engine efficiency.

This video from Detroit Diesel has a nice little segment that explains how these new clean diesel systems work (starting at 1:16 and ending at about 2mins elapsed).

As you can imagine, all this fancy emissions equipment isn’t free. Here’s a table that shows how the cost of a diesel F250 has increased over the years, adjusted for inflation:

*Price includes automatic transmission option, since that is now included in the package in 2012

After adjusting for inflation, the cost of a diesel engine in a big truck has increased at least 12% – and I say at least because there’s a good chance that the cost of the automatic transmission (which is included in all the numbers) hasn’t increased at the same rate as the entire package.

If we look at the 2003 VW Golf TDI option price (about $1200) and compare that to the option price of a diesel engine on the 2012 model ($4,000, give or take, as a straight figure isn’t available from VW), we’re seeing that the cost of emissions systems on diesel cars are at least as expensive as big trucks, if not more – perhaps as much as $2500.

Let’s set aside the increased cost and complexity of modern diesel exhaust systems and focus on the future. The EPA’s proposed 2025 vehicle emissions rules would mandate that all engines reduce their CO2 emissions by about 32%, resulting in a fleet-wide target of 203 grams of CO2/mile driven for light trucks, and 144 grams of CO2/mile for cars.

Yet three of the cleanest, most efficient diesel cars on the market today are far above those goals: 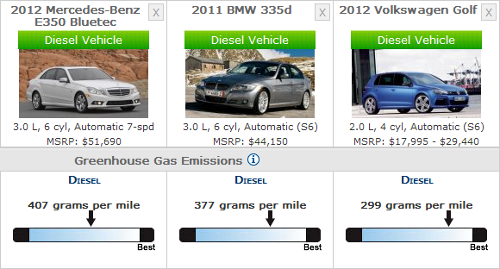 While critics argue that making gasoline and diesel engines meet the same CO2 regulations is inherently fair, the deck is stacked in gasoline’s favor. For starters, gasoline contains less carbon. Burning a gallon of pure gasoline generates about 19.6 lbs of CO2. Yet vehicles driven in the US don’t run on “pure” gasoline – they run on a blend that’s at least 10% ethanol. Since ethanol is supposedly “carbon neutral,” a gallon of gas really only generates 17.7 lbs of CO2 as far as the EPA is concerned.

Compare that 17.7 lbs of CO2 generated per gallon of gas to 22.4 lbs of CO2 generated per gallon of diesel. Diesel has a higher energy density than gasoline – which no doubt helps to make diesels more fuel efficient – but unlike gasoline, it’s not “cut” with ethanol. The bottom line here is that a diesel vehicle has to be 21% more efficient than a similar gas engine to meet the same emissions regulations. This is the “carbon penalty.”

If the CO2 per mile targets were decreased for diesel vehicles to account for the carbon penalty, the rules would be a lot closer to fair.

In addition to mystifying rules that encourage carbon monoxide pollution, expensive emissions systems, and the carbon penalty, there are a myriad of smaller reasons that diesel vehicles don’t sell very well in the US.

US Refinery Fuel Mix – Oil refineries break down a barrel of crude oil into components based on a pre-determined ratio. This ratio will vary from one refinery to the next, but a sample breakdown might look like this:

Once a refinery decides on a specific “mix,” they build their refinery system to produce that mix indefinitely. The only way to alter the mix is to re-design and/or rebuild the refinery, and that is expensive. As a result, U.S. refineries turn out just barely enough diesel to meet market demand. In years when consumer demand for diesel has increased (such as 2008), diesel prices skyrocketed relative to gasoline prices.

Fuel Taxes – According to a 2008 congressional report, diesel tax rates are about 50% higher than gasoline taxes (roughly $0.75 per gallon, depending on locality).

Higher Up-Front Vehicle Costs – Adding a diesel engine to a vehicle will increase the total vehicle cost by about 15% (give or take). While this higher up-front cost is frequently earned back in terms of both increased fuel efficiency and increased longevity, some consumers aren’t willing or able to make the higher investment.

Fuel Availability – Depending on the fuel stations in your community, fueling your diesel might not be convenient. Many consumers aren’t interested in buying a diesel vehicle if it means going out of their way to fill-up.

If you add it all up, it’s clear that the deck is stacked against diesels. While it’s unlikely we’ll see Toyota debut a diesel Tundra (only rumors persist that one is undergoing testing in Texas), diesel versions of the Chevy Colorado and Dodge Ram are gaining steam. The question is, how will these trucks survive the 2025 emissions rules? Will they be discontinued when the rules get too strict, or will their manufacturers just bite the bullet and pay the penalty?