Dear Ram – You Could Have Had A Cummins

How Ram Stole The VM Motori 3.0L From GM, and How Nissan Stole the Cummins 5.0L From Chrysler-Fiat 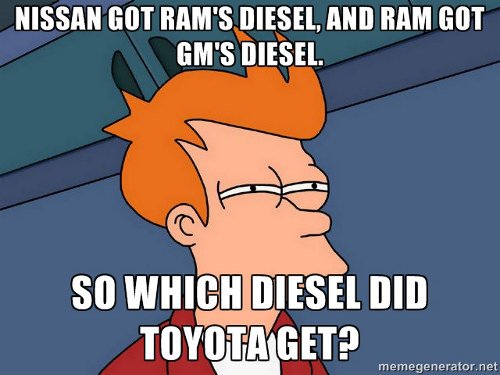 It’s a wild story, but it’s all true. Nissan stole from Ram, Ram stole from GM, and Toyota still won’t talk about a diesel Tundra.

Every once in a while I see something happen in the auto industry that makes me shake my head and wonder, but the story of Ram’s new 3.0L EcoDiesel and Nissan’s new Cummins diesel is a comedy of errors. It’s a little complicated, but the bottom line is this: Ram stole GM’s diesel, Nissan stole Ram’s diesel, and Toyota still doesn’t offer one on the Tundra. Here’s how it happened.

That’s how Ram stole GM’s diesel…here’s how Nissan did the same thing to Ram:

The moral of these stories? Cash flow is critical in the auto industry. If you have coffers full of cash, you can afford to invest in the future. If you run out of cash, someone will steal your technology out from underneath you.

As for Toyota’s diesel, we’re hearing that:

So ya…still no news on that front.

Still, it’s a good story. Next time you see a diesel Ram 1500 or Nissan Titan, you’ll have something you can talk to that truck owner about (besides the awesomeness of your Tundra of course).