The lure of the open road and the promise of adventure that a road trip offers is something that appeals to a wide demographic of car lovers. For many, the ultimate vacation would be a cross-country drive that provides ample opportunity to stop and explore the cities, places and sights that help to make America what it is.

For Steve Bouey and his friend Steve Shoppman (the Steves’), the dream of driving across the country didn’t stop when they reached the ocean on the other side. They chose to extend their journey into a 2 year odyssey that stretched across 67 different countries and a total of 66,000 miles – and they did it all from behind the wheel of a 2007 Toyota Tundra (and an 04′ Sequoia). 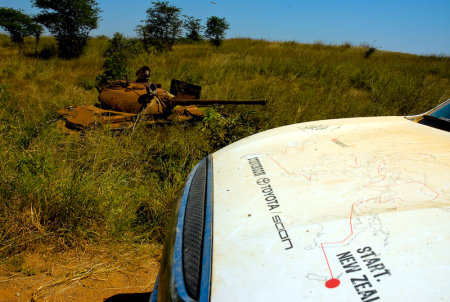 Looking across the Tundra's hood at a burned out Angolan tank.

While some might be surprised at their choice of vehicle, it was an easy decision for the two young globetrotters to embark on their adventure from behind the wheel of Toyota’s flagship pickup truck.

Today, after reading a news story from the Dallas Morning News, I’m not so sure. It seems like Tundra demand is starting to climb…

Toyota Tundra fans have been waiting on pins and needles for an “H.D. Tundra”, or heavy-duty Tundra, ever since Toyota announced they were working on a 3/4 ton Tundra back in 2005. Originally promised to follow soon after the light-duty Tundra (the current model), our sources are now saying that Toyota won’t be introducing an HD Tundra anytime soon…if at all.

In other words, what if Toyota is already producing the H.D. Tundra?

The new 4.6-liter V8 engine will be available on all 2010 model year Tundras. With 310 horsepower, 327 lb-ft. of torque and EPA fuel efficiency estimates of 15 mpg city and 20 mpg highway on 4×2 models, the new engine will deliver the best combination of power and fuel economy of any standard V8 in the full-size pickup segment. Like Tundra’s optional 5.7-liter i-FORCE V8 engine, the new 4.6-liter V8 will be mated with a six-speed automatic transmission.

TundraHeadquarters isn’t cool – at least not to Toyota. Rather than give us the opportunity to drive a pre-production Tundra, only PickupTrucks.com had a shot. At least they published a nice review. 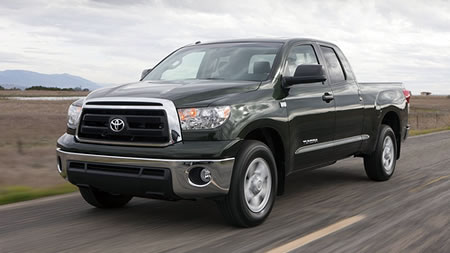 Here are the take-aways from their review of the new 2010 Tundra 4.6L: