No one ever sets out to build a project truck that ends up being a memorial to its owner. In the case of the West Coast Customs effort for Jeff “Ox” Kangola, however, it is hard to think of a more fitting tribute to one of the premier off-road riders of the past several years than the Toyota Tundra pickup that was put together for him by the talented craftsmen at the California garage. 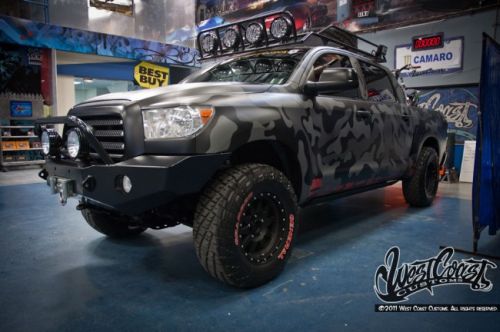 Jeff Kangola passed away last month as the result of injuries sustained in a dirt bike accident. Prior to his passing, “Ox” Kangola’s motocross accomplishments included a silver at the 2005 Winter X Games for Best Trick, the 2004 WFA Big Air Points Championship and a number of impressive finishes in SCORE Baja competition.

Ryan Friedlinghaus and his crew of mechanics, designers, body and paint men debuted the 2010 Toyota Tundra that they build for Kangola in March on the Inside West Coast Customs program that airs on Discovery’s HD Theatre channel. Dubbed the “Ox-Tundra,” the goal was to build a pickup that could incorporate some of the elements needed to survive the grueling Baja race environment that Kangola regularly conquered on his bike. At the same time, Friedlinghaus challenged his team to also produce a truck that could match the “Metal Mulisha” team style worn by Kangola, which made use of a number of dark and sinister elements in its branding and colors.

One of the great things about online communities is that some of the most interesting vehicle builds are documented and discussed on the message boards that play such an important role in tying together people with the same interests and passions. While browsing the TundraGeeks.com forum, we recently came across an impressive long travel Tundra project posted by user Tundrainsider. 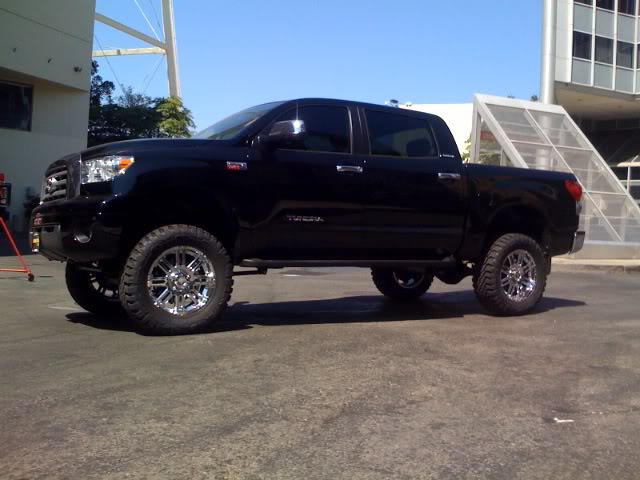 The blueprint for the build was a 2008 Toyota Tundra Crewmax Limited pickup. Tundrainsider’s first step was to install a ProComp Stage II lift kit in order to accommodate 35-inch off-road tires. It wasn’t long, however, before he felt the need to push into new territory with the truck and go down the long travel suspension route in order to give his Tundra an edge on the trail.

“Ninja Ed” might have started with a stock 2008 Toyota Tundra, but the mod bug bit hard. So hard, in fact, that he ended up putting together one of the most eye-catching custom Tundras in the country. 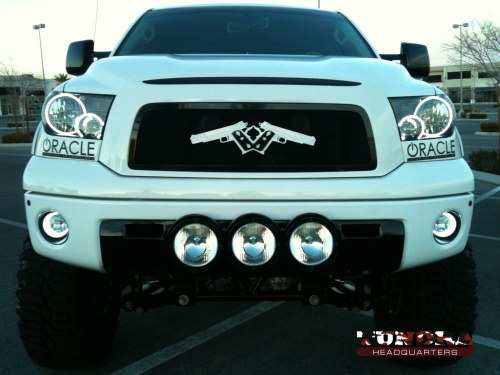 Jason ran into Ninja Ed’s masterpiece at the 2010 SEMA show and after snapping some photos was able to get in touch with Ed and get some of the details behind the build. Check it out.

At this year’s SEMA show, Jason encountered a very interesting custom Tundra put together by the people at Off Road Evolution. Off-Road Evolution is one of the premier off-road rig builders and 4×4 parts fabricators and suppliers on the West Coast. The truck was sponsored by Falken Tire, and perhaps the most unique aspect of the entire vehicle was the fact that the front end had been converted to a Dynatrac 60 series solid axle setup – perhaps the only Toyota Tundra currently out there sporting this particular modification. 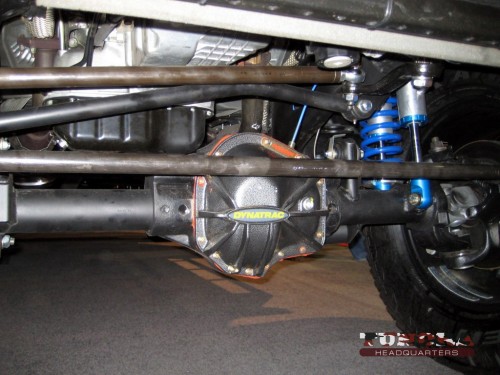 I had the chance this week to speak with Mel Wade at Off Road Evolution and discuss some of the details surrounding the truck’s build process.

Project trucks are a lot of fun – especially when those putting them together have a budget that is more in sync with that of the average vehicle owner. The folks at MotoIQ, a group of gearheads dedicated to covering the automotive landscape with solid writing and interesting features branched out into the truck segment in 2010 and selected a brand new Toyota Tundra as their next tow vehicle for their stable of track cars. Somewhere along the way, the Tundra became more than just a tire mule – it blossomed into a full-on project worthy of its own continuing series of posts and adventures documenting its evolution from bone-stock to custom rig. 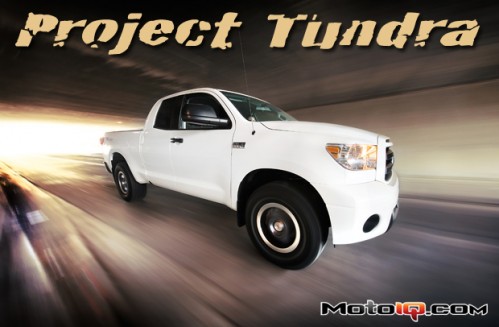 The exact Tundra model chosen was a Double Cab 4×4 with the TRD Rock Warrior package, Heavy Duty cold weather package and of course a towing package. Although the MotoIQ team was very satisfied with the Tundra out of the box, it wasn’t long before they started to customize the truck using TRD parts (chosen because of their warranty-friendly attributes).